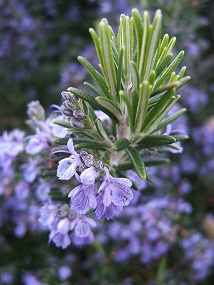 Natural Health News — Rosemary for remembrance – at least that’s what the Victorian language of flowers says.

Now a small study has added weight to that folklore by showing that chemicals in the essential oils of rosemary and spearmint improve learning and memory.

Researchers at the University of St Louis found that the higher dose of an antioxidant extract of compounds derived from rosemary was the most powerful in improving memory and learning in animals across three tested behaviours.

A lower dose of rosemary extract improved memory in two of the behavioural tests, as did a compound made from spearmint extract.

Further, there were signs of reduced oxidative stress, which is considered a hallmark of age-related decline, in the part of the brain that controls learning and memory.

The findings were presented at Neuroscience 2013, a meeting hosted by the Society for Neuroscience and the research team concludes “Our research suggests these extracts made from herbs might have beneficial effects on altering the course of age-associated cognitive decline.”

But good results in humans too

The research was supported by the VA Medical Center in St. Louis, MO, and was also supported by Kemin Industries, which makes specialty ingredients for vitamin and dietary supplements.

That doesn’t necessarily mean the findings are suspect. Nor does it mean that you need to use specially concocted extracts to get results.

Earlier this year scientists in the UK gave a group of 66 people memory tests in either a rosemary-scented room or another room with no scent.

Study participants were then given various tests to assess their memory functions, including finding hidden objects and passing specified objects to researchers at a particular time.

The results, presented at the British Psychological Society’s annual conference in Harrogate, UK showed that those in the rosemary-scented room performed better on the prospective memory tasks than those in the room with no scent.

Spearmint is rich in 1,-8-cineole, as are oils like eucalyptus, tea tree, Spanish sage, ginger and bay laurel.

Though rosemary can be used in many cooking recipes to flavour poultry or even to add an extra something to bread dough, on the list of its many talents, health benefits appear.

Not only is it a rich source of antioxidants and anti-inflammatory compounds, but also it can be used to treat indigestion. Rubbed into the scalp it may boost hair regrowth and, according to a 2010 study, rubbed into beef as a marinade  it may reduce cancer-causing agents that can form during cooking.

Spearmint, also packed with antioxidants and good for digestion, has been said to have anti-fungal properties, as well as properties that could help treat mild hirsutism in women.