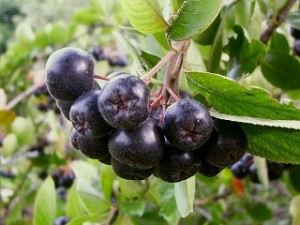 Aronia berries, also known as chokeberries, are high in antioxidant polyphenols and may even have a potent anti-cancer effect [Image: Wikipedia]

Natural Health News — New research has shown that the chokeberry – which grows abundantly in North America – has anti-cancer properties and may even improve the effectiveness of conventional cancer treatments.

Scientists from the UK base their findings on a laboratory study into the effectiveness of extract of black chokeberry (Aronia melanocarpa) in killing off cancer cells – a process known as apoptosis.

Chokeberry is a wild berry that grows on the eastern side of North America in wetlands and swamp areas as well as some parts of Europe. The berry is high in vitamins and antioxidants, including various polyphenols – compounds that are believed to mop up the harmful by-products of normal cell activity. In health supplements and drinks it is often sold as Aronia.

For this study, researchers tested an extract of chokeberry on pancreatic cancer cells. They examined what happened to these cells in the laboratory when they were treated with chemotherapy alone, chokeberry extract alone, or with a combination of both.

What they found was that adding the chokeberry extract to gemcitabine (a chemotherapy drug used in the treatment of pancreatic cancer) was more effective at halting the growth of cancer cells than the drug alone.

The researchers chose to study the impact of the extract on pancreatic cancer, because of its persistently dismal prognosis: less than 5% of patients are alive five years after their diagnosis.

The analysis in the Journal of Clinical Pathology  first looked at the general toxicity of chokeberry. It found that chokeberry had no toxic effect on the normal lining cells even at the highest doses. This suggests, say the researchers,  that it may not be able to prevent the formation of new blood vessels (anti-angiogenic properties), a process that is important in cancer cell growth.

However, the scientists also found that after 48 hours of treatment with the wild berry extract there was evidence of apoptosis in the  pancreatic cancer cells.

In addition, low doses of the extract greatly boosted the effectiveness of gemcitabine, when the two were combined, added to which lower doses of the conventional drug were needed.

This suggests either that the compounds work together synergistically, or that the extract exerts a “supra-additive” effect, say the researchers.

They go on to say that the potential of naturally occurring micronutrients in plants, such as those found in chokeberry, has not been adequately explored, at least in clinical trials.

The research it in it’s early stages but the scientists point to similar experimental studies, indicating that chokeberry extract seems to induce cell death and curb invasiveness in brain cancer, as well as other research, highlighting the potential therapeutic effects of particular polyphenols similar to those found in green tea, soybeans, grapes, mulberries, peanuts and turmeric.

“This work, first adds reinforcement to the concept that therapy for intractable cancers might usefully be augmented by the inclusion of micronutrient supplementation into regimens,” the researchers write.

“More specifically, it suggests that elements in chokeberry extract, while not intrinsically toxic, can have supra-additive effects in combination with at least one other conventional cytotoxic drug,” they conclude.

Aronia berries, also known as chokeberries, are high in antioxidant polyphenols and may even have a potent anti-cancer effect [Image: Wikipedia]