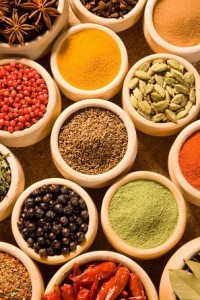 Adding herbs and spices to food could reduce the amount of fat absorbed from a meal by as much as 30%, say US researchers.

Triglyceride levels rise after eating a high-fat meal – which can lead to an increased risk of heart disease.

New data from researchers at Penn State University, found that if a high-antioxidant spice blend is incorporated into the meal, triglyceride levels can be reduced by as much as 30% when compared to eating an identical meal without the spice blend.

Sheila G. West, professor of biobehavioral health and nutritional sciences, and Ann C. Skulas-Ray, research associate in nutritional sciences, reviewed a variety of research papers that focused on the effects that spices and herbs have on cardiovascular disease risk. The scientists published their findings of their small experimental study in a supplement to the current issue of the journal Nutrition Today.

“The metabolic effects of spices and herbs and their efficacy and safety relative to traditional drug therapy represent an exciting area for future research given the public health significance of cardiovascular disease,” the researchers wrote.

“We live in a world where people consume too many calories every day,” said West. “Adding high-antioxidant spices might be a way to reduce calories without sacrificing taste.”

In preparation for their study West and Skulas-Ray reviewed several cinnamon studies that looked at the effect of the spice on both diabetics and non-diabetics. Cinnamon was shown to help diabetics by significantly reducing cholesterol and other blood lipids in the study participants. However, cinnamon did not appear to have any effect on non-diabetics.

The garlic studies reviewed were inconclusive, but this is likely because the trials had a wide range of garlic doses, from nine milligrams of garlic oil to 10 grams of raw garlic. The reviewers noted that across the studies there was an 8% decrease in total cholesterol with garlic consumption, which was associated with a 38% decrease in risk of heart problems in 50-year-old adults.

In the study West, Skulas-Ray and colleagues conducted, they prepared meals on two separate days for six men between the ages of 30 and 65 who were overweight, but otherwise healthy. The meals were identical – consisting of chicken, bread and a dessert biscuit – except that the researchers added two tablespoons of a high-antioxidant culinary spice blend to the test meal.

The researchers followed the participants for three hours after each meal, drawing blood every 30 minutes. Antioxidant activity in the blood increased by 13 percent after the men ate the test meal when compared to the control meal, which may help prevent cardiovascular disease and other chronic diseases.

West and colleagues are currently working on a study to monitor study participants for longer after eating a meal with a high-antioxidant spice blend. They want to know what happens to the fat in such a meal and suggest that if the fat isn’t being absorbed when spices are included in the meal, it might be excreted instead.

The McCormick Science Institute – an arm of the McCormick spice company – supported this work.

Adding herbs and spices to food could reduce the amount of fat absorbed from a meal by as much as 30%, say US researchers.