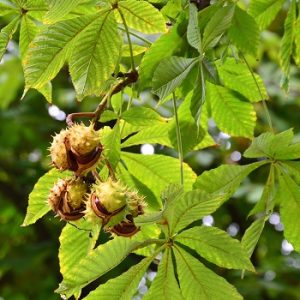 The study in the journal PLOS ONE found that chestnut leaf extract, was rich in two substances – ursene and oleanene – that blocks the Staphylococcus aureus bacteria, which causes a spectrum of problems from mild skin irritations to death, in hospitals and in the community.

The use of chestnut leaves in traditional folk remedies inspired the research, said lead researcher Cassandra Quave, an ethnobotanist at Emory University.

» The leaves of the European chestnut contain the substances – ursene and oleanene.

» It does this, not by killing the bacteria but shutting off its ability to create toxins that cause tissue damage.

“We’ve identified a family of compounds from this plant that have an interesting medicinal mechanism,” she said. “Rather than killing staph, this botanical extract works by taking away staph’s weapons, essentially shutting off the ability of the bacteria to create toxins that cause tissue damage. In other words, it takes the teeth out of the bacteria’s bite.”

Turning down the toxins

A single 50 microgram dose of the extract cleared up MRSA skin lesions in lab mice, stopping tissue damage and red blood cell damage. Further tests showed that this extract inhibits the ability of staph bacteria to communicate with one another, a process known as quorum sensing. MRSA uses this quorum-sensing signalling system to manufacture toxins and ramp up its virulence.

The discovery holds potential for new ways to both treat and prevent infections of methicillin-resistant S. aureus, or MRSA, without fuelling the growing problem of drug-resistant pathogens.

Antibiotic-resistant bacteria annually cause millions of deaths each year. Evolving strains of this “super bug” bacterium pose threats to both hospital patients with compromised immune systems and young, healthy athletes and others who are in close physical contact.

“We’ve demonstrated in the lab that our extract disarms even the hyper-virulent MRSA strains capable of causing serious infections in healthy athletes,” Quave says. “At the same time, the extract doesn’t disturb the normal, healthy bacteria on human skin. It’s all about restoring balance.”

The researchers are doing further testing on individual components of the extract to determine if they work best in combination or alone.

“It’s easy to dismiss traditional remedies as old wives’ tales, just because they don’t attack and kill pathogens,” Quave says. “But there are many more ways to help cure infections, and we need to focus on them in the era of drug-resistant bacteria.”