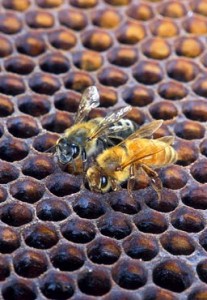 Natural Health News — A new study has found that a substance found in honeybee hives seems to stop the spread of prostate cancer cells in mice.

The substance, called caffeic acid phenethyl ester or CAPE, is made from propolis, the resin honeybees use to patch holes in their hives. Propolis has been known and used for centuries as a natural remedy for teeth and skin, as well as a defence against viruses and bacteria.

The researchers at University of Chicago Medicine studied CAPE in the test tube and in animal models and the results are published today in the journal Cancer Prevention Research.

When the researchers then fed CAPE to mice that had early stages of the human form of prostate cancer, it proved effective at slowing the growth of the disease.

Six weeks into the treatment the compound decreased tumour volume growth rate by 50%, but when CAPE treatment was stopped, tumour growth resumed its prior rate. The results suggested that CAPE stopped cell division rather than killing cancerous cells.

The CAPE mice also didn’t lose any weight during the treatment, which researchers said indicated that the compound was not overly toxic.The researchers said the compound appeared to stop the growth of the cancer cells by masking their ability to use a system of signals to detect nutrition. If cells don’t sense the presence of the food they need, such as glucose, they will stop growing.

Yet another reason to save our bees

As an animal study it’s results are not directly applicable to humans, but  the results are so encouraging that the researchers say human trials are warranted.