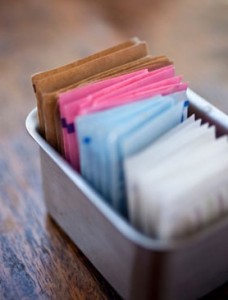 A recent trip to the supermarket revealed a new ‘surprise’: Coca-Cola Life

At first I thought the bright green can was some obscenely early Christmas promotion, but instead it revealed itself to be a lower calorie – as opposed to no calorie – version of the iconic soda, sweetened with a mixture of sugar and stevia.

The replacement of 37% of the sugar with a herbal sweetener brings the calories per 330ml can down from 130 to 89 and its sugar content down from 39g to 22g. It sounds like some sort of weird progress – but wait…

According to Action on Sugar, a group set up earlier this year to reduce the amount of sugar added to food and soft drinks,  the World Health Organization (WHO) set a guideline limit, in 2002 which suggested that  sugar should make up less than 10% of total energy intake per day.

That’s an upper limit. The WHO went to to say that sugar should really make up no more than 5% of our daily calories.

To translate that, 5% of the average adult diet would be around 25g of sugar per day. So one can of Coca-Cola Life supplies pretty much all of your daily sugar (as opposed to nearly double the recommended daily amount in the regular can).

What interested me more than the obfuscation and number crunching over sugar, and the claims in the media that ‘green is the new red’, was the addition of the natural sweetener stevia.

Zero-calorie artificial sweeteners have, for decades, been promoted as a way to combat weight problems, on the  basis that they don’t contribute to our overall calorie intake.

However, more and more data is coming out showing how toxic artificial sweeteners are. They are increasingly linked with a variety of illnesses and perhaps most importantly a higher risk of obesity.

When a large multinational corporation like Coca-Cola makes a switch like this you know its executives have read the data and are scared.

The most recent broadside against sweeteners came in the prestigious journal Nature.

It found that these, especially saccharin, could actually hasten the development of glucose intolerance by having a direct effect on the body’s ability to utilise glucose and therefore metabolic disease. The fake sugars did this in a surprising way: by changing the composition and function of the gut microbiota – the naturally occurring population of bacteria residing in our intestines.

This much talked about study was not the first to reach such conclusions.

In 2013 another also found that, in spite of past assumptions, sucralose could actually cause a spike in blood sugar.

It has long been thought that artificial sweeteners, such as sucralose, don’t have an effect on metabolism. Rather, the sweeteners react with receptors on the tongue to give people the sensation of tasting something sweet without the calories & carbohydrates associated with natural sweeteners, such as table sugar.

But more and more studies are showing health deficits caused by consumption of fake sugars. Recently they have been implicated in an increased risk of type-2 diabetes and weight gain. It has been speculated that they can confuse the mechanism by which the body identifies a foods caloric content by its sweet taste.

Other evidence suggests that sweet taste, regardless of whether it is from sugar or artificial sweeteners like aspartame, acesulfame K and saccharin, increases your appetite.

But for me it is the emphasis on gut health that we should be paying attention to.  Previous studies have shown that the gut flora of people with obesity and type-2 diabetes are different to those of healthy lean individuals.

Most recently research has shown that, in particular, a low number and diversity of bacterial species in the gut and the risk of chronic disease. Interestingly overweight people appear to have less diversity in their intestinal flora making them more susceptible to developing obesity-related conditions, cardiovascular problems and chronic inflammation.

Coca-Cola Life will no doubt be followed by other me-too lower calorie sodas – all being sold to the public as ‘healthier’. Pepsi True (with stevia, and also a green label, is coming our way).

Sodas have become such a part of our food and – if they are low calorie – health culture that many people can’t imagine a day without them.

But the truth is, even with the addition of a more natural sweetener, sodas take more than they give.  They contain colours and flavourings and can be high in sodium, phosphoric acid and caffeine – all of which come with their own specific health concerns.

If you really want to get a Life – do what you can to ditch the soda habit. Your body will thank you for it.