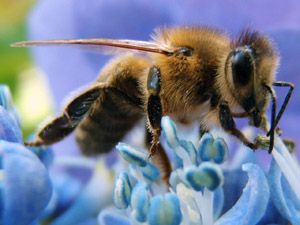 Natural Health News — Pesticides commonly used in the UK and the US are damaging honey bee brains, according to two new studies.

Honey bee colonies around the world are collapsing. Numerous diseases, a polluted environment and loss of habitat have combined has caused bee populations to plummet.

Neonicotinoid pesticides in particular have been shown by the European Food Safety Authority (EFSA), to be the cause of much of the damage to bee populations across Britain and Europe.

Now, two studies have added to the growing body of evidence to show that pesticides – both neonics and organophosphates – play a key role in bee deaths.

Work carried out by scientists at the University of Dundee, in Scotland, and published in the journal Nature Communications, looked at two common classes pesticides: the neonicotinoids imidacloprid and clothianidin, which are used to control pests on oil seed rape and other crops, and the organophosphate coumaphos oxon, which is used to control the parasitic Varroa mite, in honey bee colonies.

Exposed to the pesticides at concentrations that are encountered by foraging honeybees and within the hive the scientists found that they caused an immediate  loss of brain activity that could disrupt honeybee learning and behaviour.

Forgetting the scent of flowers

Another series of laboratory-based experiments, carried out at Newcastle University, and published in the Journal of Experimental Biology examined the behaviour of the bees when exposed to the same two types of pesticides.

The researchers there found that exposed bees were unable to learn and then remember the scent of nectar-rich flowers – a skill that is essential in their search of food.

“It would imply that the bees are able to forage less effectively, they are less able to find and learn and remember and then communicate to their hive mates what the good sources of pollen and nectar are.” said lead researchers Dr Sally Williamson.

Overall one in five bees exposed to the neonicotinoid imidacloprid commonly used on UK crops including oilseed rape, were “unable to learn”.

This inability to learn affects the entire colony since bees rely on memory to find flowers and bring back nectar to the hive, said the researchers.

It should be noted also that this kind of neurological damage from pesticide exposure is also well documented in humans.

The studies comes amid mounting pressure on the UK Government to make a decision on whether neonicotinoids should be banned, as environmentalists fear the pesticides are causing a decline in pollinators.

The European Commission recently called for a temporary moratorium on the use of neonicotinoids after a report by the European Food Safety Authority concluded that they posed a high acute risk to pollinators.

But earlier this month – soon after Neal’s Yard Remedies took its petition to ban neonics to Downing Street –14 out of the 27 EU nations opposed the ban, with both the UK and Germany refusing even to vote.

This is disappointing to say the least, but the encouraging sign is that the EU has issued a supportive statement saying it ‘remains committed to ambitious and proportionate legislative measures’, and, if the EU members fail to reach agreement in the next 2 months the ban will go through anyway.

Ian Boyd, chief scientist at the UK’s Department for the Environment Food and Rural Affairs (DEFRA), said: “Decisions on the use of neonicotinoids must be based on sound scientific evidence”. An inexplicable statement given the sheer volume of research available to him on the damage caused by these pesticides.

Perhaps not surprisingly a separate study has  just been released via DEFRA. It concludes that the neonic family of pesticides has “no major effect” on bees. However unlike the first two, this study was not published in a journal and has been dismissed by concerned scientists as “flawed”.

The science is there, My Boyd. The time for talking is over and the time for action is now.