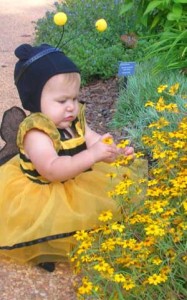 Exposure to two neonicotinoid insecticides - acetamiprid and imidacloprid - most commonly associated with bee deaths, can also harm children (and adults!)

Neonicotinoids, or neonics, have rarely been out of the news in the last few years because of their extreme toxicity to bees and other pollinators. In April of this year the European Commission voted to suspend the use of three neonicotinoid insecticides – clothianidin, thiametoxam and imidacloprid – for a period of two years, pending further safety assessments.

Neonics belong to a family of insecticides designed specifically to affect the central nervous system of insects. They bind to receptors of the enzyme nicotinic acetylcholine, causing excitation of the nerves, leading to eventual paralysis and death. They have also been found to make bees confused and forgetful, not unlike humans who have Alzheimer’s (which is, of course, a neurological disease).

Although manufacturers have long claimed that this effect is specific to insects and does not affect mammals, increasingly studies are showing this claim to be false.

EFSA delivered its scientific opinion at the request of the European Commission after considering the results of s 2012 study which showed that  the neonics were toxic to the developing brain of lab animals, as well as other  and existing data showing toxicity to the developing human nervous system.

On review, the Panel on Plant Protection Products and their Residues (PPR) – a review body reporting to EFSA – found that acetamiprid and imidacloprid may adversely affect the development of neurons and brain structures associated with functions such as learning and memory.

It concluded that current guidance levels for acceptable exposure to these insecticides may not be protective enough to safeguard against developmental neurotoxicity and should be reduced.

The Authority is now proposing that levels for acceptable exposure to these two pesticides be lowered while further research is carried out into their effect on developing brains. The authority is also proposing what it calls “the establishment of clear and consistent criteria” which would require “the mandatory submission of DNT [developmental neurotoxicity] studies as part of the authorisation process in the EU.”

It should be noted that this criteria will relate to all pesticides and not just neonics.

The move has been generally welcomed but it also throws up all sorts of uncomfortable questions about how pesticide exposures are monitored and how toxic effects are assessed. For example, why is it that neurotoxicity is not part of the routine panel of toxicological investigations required BEFORE a pesticide can be released on the market?

“It is a positive step” says Georgina Downs of the UK Pesticides Campaign:

“It has always been astonishing to a campaigner like me to know that neurotoxicity investigations in general (i.e. not just developmental neurotoxicity tests) are not already included in routine toxicology studies prior to the approval of pesticides. Especially considering that many adverse effects reported by people exposed to pesticides (particularly residents regularly exposed over the long term) are neurological effects, damage and injury.”

“In fact” she adds “the highest reported effects from people exposed to pesticides that I have received in the campaign I run are neurological effects.”

And not just babies

The point she makes is important. Harm to children, especially babies in the womb, is always a headline grabber. But pesticide exposure harms humans of all age groups, producing often disabling illnesses that can last a lifetime.

Downs has been instrumental in forcing the UK government to reassess rules on pesticides safety, in particular the risk to people in the countryside from crop spraying.

Pesticides don’t just get sprayed on fields – they are also used in urban settings, for example local parks. In addition, they don’t just affect so-called ‘target’ insects. Drift from farms and other places can spread to homes, schools and playgrounds. This latest move by EFSA as welcome as it might be shows we still have unacceptable gaps in the way we assess pesticide safety.

The kinds of assessment which EFSA is now suggesting, if carried out properly would highlight just how risky most pesticides used in the food production chain are.

Say Downs: “Considering the massive health and environmental costs of using pesticides it makes clear economic sense to switch to non-chemical farming methods. It is a complete paradigm shift that is needed, as no toxic chemicals that have related risks and adverse impacts for any species (whether humans or other) should be used to grow food.”

Exposure to two neonicotinoid insecticides - acetamiprid and imidacloprid - most commonly associated with bee deaths, can also harm children (and adults!)