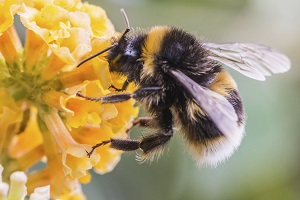 Are bees addicted to pesticides?

Natural Health News — Bees have a fatal attraction to nectar containing common pesticides, according to a new study

This could increase their chances of exposure to high levels of pesticides.

Previous studies have suggested that exposure of this kind can affect bees’ fitness. Now writing in the journal Nature, scientists are Newcastle University and Trinity college Dublin  have discovered that buff-tailed bumblebees and honeybees could not taste the three most commonly used neonicotinoid pesticides and so did not avoid them.

The lab-based study also showed that the bumblebees ate more of the food containing pesticides than the honeybees, and so were exposed to higher doses of toxins.

» Neonicotinoids and other pesticides are toxic to bees and have a profound effect on their brains.

» New evidence suggests that these pesticides are also addictive and that bees actively seek out nectar contaminated with them.

» This behaviour may be accelerating the phenomenon known as colony collapse disorder, which is causing massive die off bees around the world.

Bees and other pollinating insects are vital for increasing crop yields When pollinating crops, they can be exposed to pesticides in floral nectar and pollen. Several studies have shown that neonicotinoids have negative effects on bee foraging and colony fitness. As a result, public concern has grown over the impact of neonicotinoids on bees and other pollinators. In April 2013, the EU introduced a temporary ban on the use of neonicotinoid pesticides on flowering crops, while further scientific and technical evidence was gathered.

Professor Geraldine Wright, lead scientist on the study at the Institute of Neuroscience at Newcastle University, said: “Neonicotinoids target the same mechanisms in the bee brain that are affected by nicotine in the human brain. The fact that bees show a preference for food containing neonicotinoids is concerning as it suggests that like nicotine, neonicotinoids may act like a drug to make foods containing these substances more rewarding. If foraging bees prefer to collect nectar containing neonicotinoids, this could have a knock-on negative impact on whole colonies and on bee populations.”

Both studies found that exposure to common pesticides, neonics and organophosphates, make bees confused and forgetful. The pesticide exposure disrupts healthy brain activity altering the bees’ behaviour and leaving them unable to learn.

More distressing, and poignant, is the finding that pesticide exposure renders the bees unable to remember the scent of nectar-rich flowers – vital in a bee’s search of food – and to relay that information back to the hive. Remembering is essential to survival not just to that single bee but to the whole hive.

Jane Stout, Professor of Botany and Principal Investigator in the School of Natural Sciences at Trinity College Dublin, said: “Our findings imply that even if alternative food sources are provided for bees in agricultural landscapes where neonicotinoid pesticides are used, the bees may prefer to forage on the neonicotinoid-contaminated crops. Since neonicotinoids can also end up in wild plants growing adjacent to crops, they could be much more prevalent in bees’ diets than previously thought.”