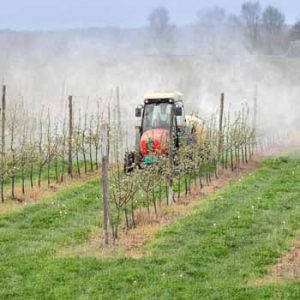 Apples, pears and grapes as well as cabbages, spinach, lettuce, kale and tomatoes are routinely sprayed with fungicides. [Photo: Bigstock]

Agricultural fungicides could play a role in autism

Natural Health News — Commonly used fungicides, used widely on fruit and vegetables, have been found to cause similar genetic changes in the brain to those found in people with autism and neurodegenerative conditions, including Alzheimer’s disease and Huntington’s disease.

In the laboratory study, published in the journal Nature Communications, scientists exposed mouse brain cells to more than 300 different pesticides and fungicides to better understand how they affect the brain. The researchers were looking in particular for changes in genetic expression (the way genes function).

“Based on RNA sequencing, we describe six groups of chemicals,” said Mark Zylka, PhD, senior author of the study and associate professor of cell biology and physiology at University of North Carolina. “We found that chemicals within each group altered expression in a common manner. One of these groups of chemicals altered the levels of many of the same genes that are altered in the brains of people with autism or Alzheimer’s disease.”

» When US researchers tested several hundred fungicides on brain cells they found that many of them induced genetic changes in the brain that were similar to those found in autism and Alzheimer’s disease.

» The researchers hope the findings will trigger more study and act as a wake up call to regulators that routinely allow too high levels of these chemicals in our food.

These fungicides – many of which have only been in use for 20 years or so – are widely sprayed on crops like cabbages, spinach, lettuce, kale, tomatoes, apples, pears and grapes.

A wake up call for regulators?

Zylka and his group found that these chemicals reduced the expression of genes involved in synaptic transmission – the connections important for communication between neurons.

If these genes are not expressed properly, then our brains cannot function normally. Also, these chemicals caused an elevated expression of genes associated with inflammation in the nervous system. This so-called neuroinflammation is commonly seen in autism and neurodegenerative conditions.

The researchers also found that these chemicals stimulated the production of free radicals – particles that can damage the basic building blocks of cells and that have been implicated in a number of brain diseases. The chemicals also disrupted neuron microtubules.

“Disrupting microtubules affects the function of synapses in mature neurons and can impair the movement of cells as the brain develops,” Zylka said. “We know that deficits in neuron migration can lead to neurodevelopmental abnormalities. We have not yet evaluated whether these chemicals impair brain development in animal models or people.”

Zylka cautioned that more evidence was necessary to determine if these changes also happen in people.

Jeannie T. Lee, MD, PhD, professor of genetics at Harvard Medical School and Massachusetts General Hospital, who was not involved in this research, said, “This is a very important study that should serve as a wake-up call to regulatory agencies and the general medical community. The work is timely and has wide-ranging implications not only for diseases like autism, Parkinson’s, and cancer, but also for the health of future generations. I suspect that a number of these chemicals will turn out to have effects on transgenerational inheritance.”

Zylka’s group also analysed information from the US Geological Survey, which monitors countywide pesticide usage, as well as the Food and Drug Administration and the U.S. Department of Agriculture, which test foodstuffs yearly for pesticide residues.

Of the chemicals Zylka’s team studied, only the usage of pyridaben has decreased since 2000. Rotenone use has remained the same since 2000. However, the use of all the fungicides in this group has increased dramatically over the past decade.

They note also that a study from the Environmental Protection Agency found that pyraclostrobin is found on foods at levels that could potentially affect human biology, and another study linked pyraclostrobin usage to honeybee colony collapse disorder.

Previous work has also shown that a single dose of the fungicide trifloxystrobin reduced motor activity for several hours in female rats and for days in male rats. Disrupted motor function is a common symptom of Parkinson’s disease and other neurological disorders. The related fungicide picoxystrobin impaired motor activity in rats at the lowest dose tested.

Says Zylka “The real tough question is: if you eat fruits, vegetables or cereals that contain these chemicals, do they get into your blood stream and at what concentration? That information doesn’t exist.” Also, given their presence on a variety of foodstuffs, might long term exposure to these chemicals – even at low doses – have a cumulative effect on the brain?

Zylka noted that conventionally grown leafy green vegetables such as lettuce, spinach, and kale have the highest levels of these fungicides. But due to each chemical’s effectiveness at reducing fungal blights and rust, crop yields have increased and farmers are expanding their use of these chemicals to include many additional types of food crops.

“Virtually nothing is known about how these chemicals impact the developing or adult brain,” Zylka said. “Yet these chemicals are being used at increasing levels on many of the foods we eat.”

Prior to starting the project, Zylka said, he did not pay much attention to whether he was buying organic or conventionally grown food. But over the course of the study, his perspective changed. “These fungicides are bad news for neurons. So I now purchase organic whenever possible, and especially for my young kids. I would prefer not to be exposed to chemicals like this, especially after seeing what they do to neurons.”

Apples, pears and grapes as well as cabbages, spinach, lettuce, kale and tomatoes are routinely sprayed with fungicides. [Photo: Bigstock]