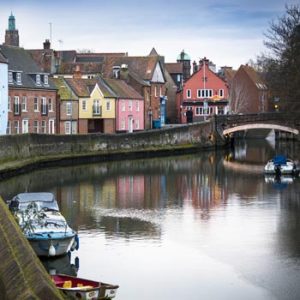 The river Wensum, in Norfolk, UK is one of those found to be heavily polluted with neonicotinoids. [Image: Bigstock]

Natural Health News — You might think neonicotinoid insecticides are only a problem in farming, but recent research shows that use of these harmful chemicals, are polluting UK waterways and causing devastation to insect life.

According to the group Buglife, the first analysis of new monitoring data reveals that British freshwaters are heavily contaminated with neonicotinoids, insecticides that most of us associate with bee deaths. Half of the sites monitored in England exceed chronic pollution limits and two rivers are acutely polluted.

Neonicotinoids are not only highly toxic to bees but also highly toxic to aquatic insects. In addition to killing insects that live or feed near water, such as mayflies, the chemicals also damage the health of fish and birds who feed on those insects, threatening the life of our streams and rivers.

» A recent survey reveals that the UK’s streams and rivers are suffering high levels of neonicotinoid pollution.

» Neonics in our waterways are highly toxic to aquatic insects and the birds and fish that feed on them.

» While some of this pollution is due to agriculture, some is also due to other sources such as high use of neonics in pet products.

In spite of this, aquatic pollution by neonics has not yet received the same attention because the UK Government has not responded to calls to introduce systematic monitoring, even though, under the EU Water Framework Directive ‘Watch List’ initiative, the UK was required to introduce a pilot monitoring scheme for all five commonly used neonicotinoids – imidacloprid, clothianidin, thiamethoxam, acetamiprid and thiacloprid.

Sampling was done at 23 sites in 2016: 16 in England, four in Scotland, three in Wales and three in Northern Ireland.

This is the first systematic testing of neonicotinoids in rivers in Britain. According to the results, half the rivers tested in England had either chronic or acute levels of contamination. Of the 23 rivers tested across Britain, all but six contain neonicotinoids. Eight rivers in England exceed recommended chronic pollution limits, and two are acutely polluted.

The River Waveney on the Norfolk/Suffolk Border was the worst polluted river with the acute harm level exceeded for a whole month and the River Wensum in Norfolk, a Special Area of Conservation for its river life, was also chronically polluted. These rivers supply the Broads, an internationally important wetland site and home to many endangered aquatic animals. Sugar beet fields are the most likely source of pollution in these rivers. Both rivers were polluted with both clothianidin and thiamethoxam

The River Tame, an almost entirely urban river in the West Midlands was only monitored twice, and the second reading was very high, indicating a probable industrial or disposal pollution event. The river Tame and the river Ancholme in Lincolnshire, were primarily polluted with clothianidin. 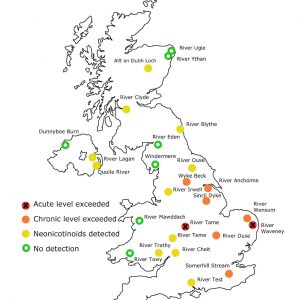 Pet products add to the pollution

Concerns are raised about the levels of imidacloprid recorded in rivers, including urban rivers and a remote Scottish stream in the Cairngorms. Imidacloprid is now a rare arable insecticide, but because it does not break down easily in soil it will continue polluting water in arable areas for years to come. However, it is still used in greenhouses, which are known to be a particular pollution risk to water bodies and is used as a flea treatment on pets. The most likely source of pollution in the Cairngorms is when it washes off a treated dog romping in a stream.

The report states that imidacloprid applied to pets will run off into storm drains and water courses when it rains or when the animal or its bedding is washed, adding: “In addition some Imidacloprid is likely to be excreted by the animals in urine and faeces after absorption through the skin.”

“We are devastated to discover that many British rivers have been heavily damaged by neonicotinoid insecticides. It is vital that action is taken to completely ban these three toxins, including in greenhouses and on pets, before another year of disgraceful pollution occurs.” Matt Shardlow, CEO, Buglife.

In December 2017 the EC Standing Committee on Plants, Animals, Food and Feed discussed proposals for a blanket ban, but did not vote, putting off a decision until early 2018.

The UK government has reversed its previous stance on neonicotinoids, now saying that there should be tougher restrictions on neonicotinoid pesticides are justified by the growing weight of scientific evidence they are harmful to bees and other pollinators,

In the US, after its recent aquatic analysis, the Environmental Protection Agency (EPA) quietly lowered its aquatic benchmarks for imidacloprid a move which campaigners say reflects a growing understanding of how highly toxic imidacloprid is to aquatic invertebrates.

Results of this latest survey show how important it is to understand the bigger picture of pesticide pollution – both where it comes from and where it goes – in order to guide regulation.

The river Wensum, in Norfolk, UK is one of those found to be heavily polluted with neonicotinoids. [Image: Bigstock]