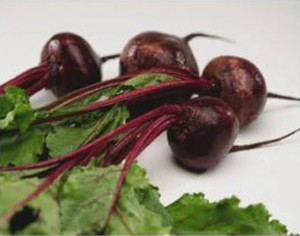 Beets are an excellent food source of vitamin B3

Vitamin B3 – our newest weapon against ‘superbugs’?

Natural Health News — A common vitamin may turn out to be a powerful weapon to fight certain antibiotic-resistant  ‘superbugs’ that health experts see as a threat to public health.

In laboratory tests scientists found that a form of vitamin B3, nicotinamide, increased by up to 1,000 fold the ability of the immune system to kill Staph bacteria.

The research, published in the Journal of Clinical Investigation, grew from the findings of a study into a rare genetic blood disorder called neutrophil-specific granule deficiency.

This disease is caused by a mutation in a specific gene, CEBPE, that regulates several antimicrobial factors in the body. Sufferers have significantly weakened immune systems, leaving them prone to severe, chronic and life-threatening infections, including Staph.

In their further investigations the researchers found that high doses of the nicotinamide form of vitamin B3 stimulated the CEBPE gene, enhancing white blood cells’ ability to combat Staph infections, including methicillin-resistant Staphylococcus aureus or MRSA in the test animals.

When studied in human blood, clinical doses of the vitamin appeared to virtually wipe out the Staph infection in only a few hours.

Vitamin B3 is common known as niacin, however it has two other forms as well, niacinamide (nicotinamide) and inositol hexanicotinate, each of which have different effects from niacin.

At very high doses B3 supplements have been shown to have a negative effect on liver and stomach health. In any case B vitamin supplements should not be taken in isolation but instead as part of the entire B-complex, since all work together synergistically.

Superbugs on the rise

Superbugs are on the rise not just in hospitals and nursing homes, but also in prisons, the military and among athletes.

“It’s critical that we find novel antimicrobial approaches to treat infection and not rely so heavily on antibiotics. That’s why this discovery is so exciting. Our research indicates this common vitamin is potentially effective in fighting off and protecting against one of today’s most concerning public health threats.”

Formal testing in clinical trials with humans is called for, say the researchers. “There’s more research to be done,” adds co-researcher Phillip Koeffler, MD, professor of medicine at Cedars-Sinai, “but we believe that vitamin B3, and other compounds that are able to increase the activity of this particular gene, have the potential to be effective against other antibiotic-resistant bacteria in addition to strains of Staph,” he said.

Beets are an excellent food source of vitamin B3