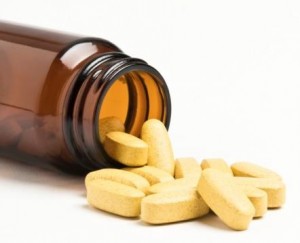 New evidence has shown that taking pantethine, a form of vitamin B5, can lower LDL ('bad') cholesterol by 11%

B5 supplement could help lower cholesterol

According to the authors, the study, published in the journal Vascular Heath and risk Management, confirms “the efficacy of pantethine in a healthy North American population who had mild to moderate cholesterol levels,”  and suggests that B5 is a natural alternative for those who don’t want to take statin drugs.

Common adverse effects of statins can include headaches, dizziness, muscle soreness, and fatigue. More serious problems include muscle and liver damage and an increased risk of developing diabetes. There is evidence that that “up to 20% of the general publication can’t tolerate statins, and others have health issues that may not make them a good candidate for statin therapy,” say co-author of the current study,

In contrast, pantethine only rarely causes side effects, with mild stomach upset being the most common. A review of studies found that the supplement led to side effects in less than 2% of people.

For this study Rumberger and colleagues gave 120 people a daily pantethine supplement over a 4 month period (600 mg/day from weeks 1 to 8 and 900 mg/day from weeks 9 to 16). Participants also followed a healthy diet. Those taking the supplement experienced an 11% reduction in “bad” LDL cholesterol while those in the control group, who also followed a heart-healthy diet, experienced a 3% increase.

The effect in this study is milder than with statins but earlier studies have shown a larger effect. Many of these studies took place in the 1980s and 1990s,  however a renewed interest in alternatives has grown as the problems with statins and other cholesterol lowering medications have emerged.

A next useful step in the research would be to test pantethine against statins.

In Japan pantethine is sold as a cholesterol lowering medicine. Elsewhere in the world it is available as a supplement without medicinal claims. These results point the way to possible new and safer alternatives for those with mild to moderately high cholesterol levels

A naturally occurring substance, pantethine is also produced as a by-product when the body metabolises pantothenic acid.  It is, in addition, a precursor to co-enzyme A (CoA), which plays a critical role in the metabolism and breakdown of proteins, carbohydrates and fats.

Pantethine and pantothenic acid are found in most foods, including vegetables like avocado and sweet potato, sunflower seeds and meat. Liver, oily fish, shitake mushrooms and yeast have especially high concentrations.

Pantethine as a supplement is a compound made from pantothenic acid and cysteamine, a breakdown product of the amino acid cysteine. When ingested, it is broken down into its component parts. Both substances play a  crucial role in supporting a healthy metabolism of cholesterol and triglycerides and blocking the enzyme which the body uses to manufacture cholesterol.

Although pantethine is derived from pantothenic acid, the substances have different roles in the body. Pantethine is more biologically active in the way it helps metabolise and mediate the production of fats.

Pantothenic acid does not have this activity, but is critical for many other functions ranging from the production of hormones, antibodies, red blood cells, and acetylcholine, an important neurotransmitter (carries signals between nerve cells) and maintaining blood sugar levels.

New evidence has shown that taking pantethine, a form of vitamin B5, can lower LDL ('bad') cholesterol by 11%