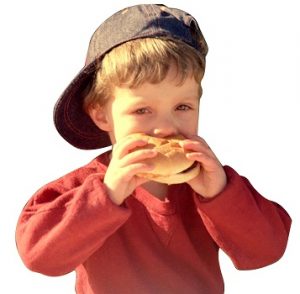 Natural Health News — A prebiotic-rich diet could help obese children regulate their calorie intake better, according to a recent study.

The obesity epidemic among children has caused alarm throughout the developed world and finding ways to help kids regulate their calorie intake is a widespread concern.

Writing in the journal EBioMedicine, an international research team, which included scientists from China, France, Germany and the UK, began with the premise that since prebiotic fibre improved appetite regulation in adults, it might do the same for children.

The small study recruited 38 obese children; 17 with Prader-Willi syndrome, or PWS – a genetic condition that predisposes them to obesity – and 21 who were simply obese. The children were put on a healthy diet, which reduced their calorie intake by 30% and was supplemented by three different pre-prepared ‘formulas’ per day for a minimum of 30 days (PWS children stayed on the intervention for 90 days).

» Fermentable, or ‘prebiotic’ fibre’ can help regulate calorie intake in overweight adults. It does this, in part, by reducing the number of bacteria which produce toxins that interfere with appetite control and satiety.

» An international research team has found it can do the same in children, even if their obesity is caused by a genetic condition.

» The researchers found that prebiotics not only helped the children feel fuller, they restored beneficial bacterial balance in the gut leading to better appetite control.

The formulas contained a broad spectrum of nutrients as well as traditional Chinese medicinal foods, and non-digestible but fermentable carbohydrates (prebiotics)

In a relatively short time the healthy diet rebalanced the children’s gut flora in favour of higher levels of beneficial bacteria, while reducing levels of toxin-producing bacterial types. It worked equally well in those children that were genetically predisposed to obesity as it did in those who were simply obese.

Several studies now suggest that higher levels of toxin-producing bacteria, such as enterobacteria, in the gut can lead to insulin resistance. This in turn means that even if a person has eaten well, the body never gets the right signals from the gut that it is full.

The dietary intervention also produced significant body weight loss, with the ‘simple’ obese children losing an average 9.5% reduction from their initial bodyweight, while PWS children had a weight loss of 7.6%.

The gut connection to obesity

The relationship between gut bacteria and obesity is a hot topic in health research at the moment.

In 2006 scientists showed that the microbial populations in the gut are different between obese and lean people, and that when the obese people lost weight their microflora reverted back to that observed in a lean person, suggesting that obesity may have a microbial component.

In 2011 a study led by the same researcher reported that ingestion of probiotic bacteria produced a change in many metabolic pathways, particularly those related to carbohydrate metabolism.

Lab tests in mice have shown an association between gut bacteria and obesity, but trials with people are only just getting started.

A 2013 study  suggested that an intestinal microbe necessary for maintaining the gut lining and promoting efficient food absorption, could be used to prevent obesity and associated metabolic disorders, such as those that lead to type-2 diabetes.

In a 2013 another trial, scientists in Shanghai studied 93 obese people who started with an average Body Mass Index (BMI) of 32. Volunteers were given supplements that promoted the growth of certain types of bacteria and reduced the levels of other bacteria in the gut, alongside a balanced diet. People in the trial lost on average 5kg over nine weeks, and the 45% who carried on for 23 weeks lost on average 6kg. Their average BMI fell to 29.3.

The new study adds to the evidence that prebiotics should be considered a useful tool in dealing with childhood obesity whether it is caused by genetics or overeating.