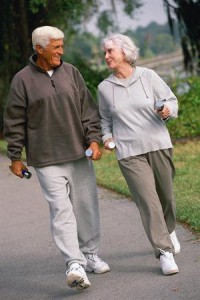 Natural Health News — Moderate physical activity may protect brain health and stave off shrinkage of the hippocampus – the brain region responsible for memory and spatial orientation that gets attacked first in Alzheimer’s disease.

Dr. J. Carson Smith, a kinesiology researcher in the University of Maryland School of Public Health who conducted the study, says that while all of us will lose some brain volume as we age, those with an increased genetic risk for Alzheimer’s disease typically show greater hippocampal atrophy over time.

Smith and colleagues tracked four groups of healthy older adults ages 65-89, who had normal cognitive abilities, over an 18-month period and measured the volume of their hippocampus (using structural magnetic resonance imaging, or MRI) at the beginning and end of that time period.

In addition, people in the study were classified as high risk for Alzheimer’s if a DNA test identified the presence of a genetic marker – having one or both of the apolipoprotein E-epsilon 4 allele (APOE-e4 allele) on chromosome 19 – which increases the risk of developing the disease.

The findings are published in the open-access journal Frontiers in Aging Neuroscience.

This is the first study to look at how physical activity may impact the size of the hippocampus in those who have a genetic risk for Alzheimer’s disease,”

Currently, there are no other treatments shown to preserve hippocampal volume in those that may develop Alzheimer’s disease, so the finding that exercise can help so of tremendous value.

“We know that the majority of people who carry the APOE-e4 allele will show substantial cognitive decline with age and may develop Alzheimer’s disease, but many will not. So, there is reason to believe that there are other genetic and lifestyle factors at work,” Dr. Smith says. “Our study provides additional evidence that exercise plays a protective role against cognitive decline and suggests the need for future research to investigate how physical activity may interact with genetics and decrease Alzheimer’s risk.”

Dr. Smith has previously shown that a walking exercise intervention for patients with mild cognitive decline improved cognitive function by improving the efficiency of brain activity associated with memory.

Of the current study he says: “The good news is that being physically active may offer protection from the neurodegeneration associated with genetic risk for Alzheimer’s disease”

“We found that physical activity has the potential to preserve the volume of the hippocampus in those with increased risk for Alzheimer’s disease, which means we can possibly delay cognitive decline and the onset of dementia symptoms in these individuals. Physical activity interventions may be especially potent and important for this group.”