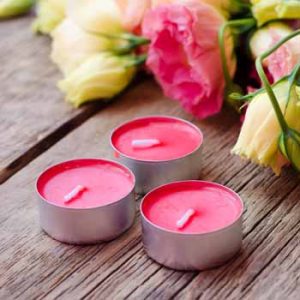 No danger of any natural ingredients here! But are candles our biggest health worry? [Photo: Bigstock]

Can candles cause cancer?

Just when you thought the news had hit a slow patch a new ‘report’ has got everyone in turmoil about the household death traps that are scented candles.

Many of us use candles, scented or otherwise to improve the ambiance of our homes. It seems like harmless pleasure and for the most part it is.

Like everything, much can depend on your choice of candles. There’s no question that candles can emit certain unhealthy substances, usually from the wick which can send heavy metals like lead, cadmium into the air and from there into the body via the lungs. Good quality organic candles don’t use these toxic wicks.

Now, it seems we should be fearful of candles that emit a formaldehyde-forming substance called limonene. The unquestioning reporting of this message was not just unhelpful, it was shocking – and sometimes funny.

My particular favourite was the Daily Express which informed readers that limonene “mutates in to formaldehyde when it released in to the air”.[my emphasis]. The Telegraph also spoke of mutations, as did the Mirror.

Note to news editors, chemicals are not alive. They oxidise, they react and degrade and in some instances they can cause mutations in living organisms. But they don’t mutate.

The story arose from the BBC programme Trust Me I’m a Doctor, which set up a small experiment in conjunction with the National Centre for Atmospheric Science at the University of York to see if houseplants could help clean the air. Again, there is very good research on how certain plants can help clean up indoor air pollution.

To do this the programme makers monitored the air in 6 households in York, all living in modern homes, for the presence of a range of ‘volatile organic chemicals’ (VOCs) chemicals like benzene, formaldehyde and a-pinene that can become gases at normal room temperature.

Many VOCs are used as solvents (for instance in cleaning products but also building materials such as paints) and fragrance chemicals. As a result many modern homes are full of them.

In three of the homes a particular VOC, limonene – or ‘limocene as the Independent newspaper called it in the rush to get the bad news out to everyone – was found at very high levels.

Limonene is a natural constituent of certain essential oils, particularly citrus, mints and pine oils, but can also be synthesised fairly cheaply. It is used widely in cleaning products and air fresheners as well as household items like scented candles. Indeed the researchers at York have found that scented candles had some of the highest levels of limonene they had ever seen.

This is probably because limonene is easy and cheap to synthesise and as such is increasingly widely used as a household fragrance. The programme itself did not differentiate between essential oils and synthetic limonene sources.

Some volatile chemicals can be highly reactive. When limonene, for example, comes into contact with ozone it turns into formaldehyde.

Exposure to continuous high concentrations of airborne formaldehyde carries health risks. Most major health agencies throughout the world including the prestigious International Agency for Research into Cancer classify formaldehyde as a human carcinogen. But airborne formaldehyde at lower levels can also irritate the eyes, nose and throat and cause dizziness, headaches rashes, nosebleeds and diarrhoea.

Putting houseplants into those homes removed the formaldehyde but did not lower the levels of limonene, which even rose in some instances.

Maybe all the formaldehyde came from the limonene in the candles. But also maybe not.

In the house with the highest limonene levels for example the TV programme clearly showed the owner liberally spraying air fresheners and furniture polishes around the house.

The 6 homes in the experiment looked to be new build homes which would have made use of more man-made building potentially formaldehyde-emitting materials.

As the experiment took place in the north of England in the winter, the heat will have been turned up and the windows and doors closed in the homes studied. The raised indoor temperature may have encouraged formaldehyde to escape from household building materials and furnishings and the closed windows and doors may have helped concentrations build up.

We will never really know where the formaldehyde came from because this wasn’t a real study or even real story. There were no controls, and there was no assessment of or adjustment for the many variables that could affect formaldehyde levels in homes.

It’s worth remembering also the context in which the media misreporting takes place – one of near blinding hostility to any aspect of what could loosely be called ‘natural health’ or alternative lifestyles. It wasn’t that long ago that stories abounded about how aromatherapy massage caused air pollution.

Likewise, focussing on candles as the villain of this piece really does miss the point – that today we invite all kinds of harmful chemicals into our homes without ever knowing it. Fragrance chemicals are certainly a growing part of this, but they are not the whole story and indeed many fragrance chemicals, in their synthetic form, do double duty as industrial chemicals, which is why the researchers also tracked household cleaner use.

It’s easy to throw a candle away or change your cleaning products. Getting to the source of all the toxic VOC emissions in your home requires the kind of persistent detective work that too few are willing to undertake but which, for health’s sake many more of us should probably be involved in.

No danger of any natural ingredients here! But are candles our biggest health worry? [Photo: Bigstock]