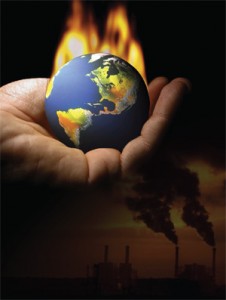 Climate change is real, it's happening now and it's affecting our health

How a changing climate could affect our health

This week the Rio +20 Summit on Sustainable Development , commemorating the 20th anniversary of the first “Earth Summit”  gets under way.

In twenty years we’ve witnessed politicians, bureaucrats, campaigners and NGOs gathering together in  meeting after meeting in glamorous cities and resorts around the world to discuss what to do about the problems of sustainability, ‘green’ economics and climate change.

This month CO2 levels reached the significant 400ppm mark – indicating we are now way beyond the point of no return (at the first Rio conference global CO2 was around 350ppm – so a relevant question would be: what good have all these expensive, wasteful, indulgent conferences really done?).

Many people are concerned that the issue of climate will be be de-emphasised at this conference. Indeed a Climate Change Task Force (CCTF) – made up of 30 climate scientists, other experts and world leaders – has warned that sidelining climate change at the Rio+20 Summit  threatens progress on the conference’s other goals, such as combating poverty and building economies that value nature.

We would argue that it also stops us from understanding and responding to the way in which climate change impacts human health.

GM mosquitoes to the rescue?

Climate change is real (see video at the bottom of this page). Its effects are already happening and will continue to accelerate. These effects will be felt in all parts of our lives, including our health.

Earlier in the year, scientists in Brazil reported on a novel solution for the spread of diseases, such as malaria and dengue fever by mosquitoes.

In what is believed to be the largest experiment in the wild to date, the scientists released more than ten million genetically modified male mosquitoes in the city of Juazeiro, population 288,000, over a period of time starting a year ago.

The GM mossies are a little more fit than the natural ones and they live longer and are expected to become the dominant species in area fairly quickly. The Brazil experiment found that 85% of the eggs they collected were from GM mosquitoes. Problem solved.

Environmental advocates, including GeneWatch UK, have expressed alarm over the poor science on which this latest and other GM mosquito projects are based, and on the potential of GM mosquitoes to survive and breed in the wild with unpredictable results.

One company, UK-based Oxitec, is addressing the problem of interbreeding by experimenting with what it says are sterile GM mosquitoes.

These insects have been created with an added gene that, unless they are given the antibiotic tetracycline, will kill them before they reach sexual maturity. Should they mate with wild mosquitoes, these GM mosquitoes also pass on this gene to the offspring, which is intended to gradually decrease the population of wild mosquitoes over time.

Experiments with these mosquitoes have been taking place in Malaysia and the Cayman Islands and such is the enthusiasm for this technology that the State of Florida is planning to release the GM mosquitoes.

However, a leaked document earlier this year found that although the Oxitec’s GM mosquitoes are supposed to be sterile in fact around 15% of the eggs do survive if the antibiotic tetracycline – widely used in agriculture – is present in the environment.

Opponents of GM are, perhaps unsurprisingly, shocked by the absurd presumptions about the safety of releasing transgenic insects into the wild. They make the point that mosquitoes, irritating as they can be, also play an important role in the food chain, and particularly the animal food chain. They also serve as plant and crop pollinators, without which we may not be able to grow food.

In addition these kinds of magic bullet solutions seem to ignore the bigger problem, namely that as our climate changes, malaria – along with most other vector-borne diseases – is set to become a worldwide, rather than a local, problem.

That climate change will redefine what we know about health and disease is a certainty and yet our understanding of how it will change everything remains very limited and focused on the obvious.

It’s not just that summers will be hotter or that extreme weather patterns such as hurricanes will devastate communities. It’s not even the fact that changing climate will redistribute disease-carrying insects, such as mosquitoes, making their range much wider – though these things are indisputably important.

Dramatic increases in severe weather events such as heatwaves, major storms and flooding will certainly have a dramatic effect on our health and wellbeing. And certainly it is right that governments, scientists and health officials should be thinking about the most effective way to respond to the greater number and wider scope of climate-related health crises that we could be facing.

…And the smaller picture

But to really get to grips with what climate change will mean to human health, we need to be paying attention to what will happen on the micro level, the level beyond that which we can see with our everyday eyes.

For years, we have lived in fear of ‘germs’ – bacteria, viruses and fungi and other parasites that can invade our bodies and cause illness. We spend billions each year producing antibiotics to fight bacteria.

For decades, we have gulped these magic bullets down by the handful – until we realised that ‘germs’ are smarter and much more adaptable than we are and have the ability to become rapidly immune to their effects. The more we attack them, the more invulnerable they become.

If antibiotics have taught us anything, it’s that bacteria love a challenge. Likewise our efforts to control influenza, both human and avian.  Now, in an era of climate change, we have set a challenge to the world’s microbes that may see them evolving faster than we can envisage creative solutions to stop them.

These changes are already happening and affecting the health of humans and animals. For example, blue tongue disease is a viral infection that attacks the blood vessels of ruminant animals, primarily sheep and cows, causing high fever, sweating, swollen feet and, in some animals, a characteristic blue tongue. It has now been linked to climate change.

The virus that causes the disease has adapted very quickly and scientists predict that as the climate heats up the number of outbreak could increase devastating the businesses of livestock farmers.

Scientists studying Vibrio cholerae, the bacterium that causes cholera, have found the same thing. As climate variability in that country increases, the bacterium has rapidly evolved to be less sensitive to climate changes, and thus more robust.

Likewise there is evidence that the Yersinia pestis bacterium, which causes bubonic plague, favours a warmer climate. Just a 1º C increase in spring temperatures is predicted to lead to a more than 50% increase in incidence of the disease (known commonly as the Black Death) that wiped out nearly half of the European population in the mid-1300s.

Given the rapid way the flu virus can adapt to its environment, some scientists believe that climate change could create two flu seasons  The infections they say could be less severe but these milder infections can mean that the body does not produce quite enough antibodies to fight off the virus completely.

Researchers at Cardiff University warned that milder winters in the UK could also lead to colds that were less severe but lasted much longer, maybe even permanently. Result? A chronically under-par population with permanent sniffles.

It may not just be the weather that is influential in creating more adaptable and powerful bugs. Some scientists speculate that rising levels of atmospheric CO2 can have a dramatic effect on the growth cycles of viruses. The theory is that CO2 is an acidic gas, and viruses in particular thrive in more acidic conditions.

Some evidence suggests that the common influenza virus, as well as the less common Ebola and SARS viruses, prefers this more acidic body environment – just the kind that might arise in the blood and tissues of humans who are inhaling more CO2 with every breath.

In the same way that viruses can adapt to changing external climate, it seems they can also adapt to the changing internal climate of bodies living in a CO2-heavy environment.

Will it make them stronger and more virulent? No one knows yet, but clearly, whatever the emerging climate can throw at them, microbes will be able to hit back – with force.

Let’s hope that in between sipping caipirinhas by the beach at Ipanema at least some of those officials will actually become so embarrassed by their own lack of commitment over the last 20 years that they will actually find the motivation to do something meaningful to help us all cope with the coming changes.

Climate change is real, it's happening now and it's affecting our health