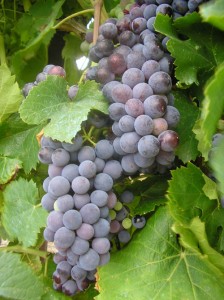 This holiday season organic wine could be the best treat you can give yourself – and the environment.

As more and more people become interested in ways of living more natural and healthier lives, attention to all parts of our diets becomes more focused. It’s easy to see the value, both nutritionally and environmentally, of fresh local natural organic produce in our everyday diets.

But what about those little treats we all enjoy, such as a glass of wine with family and friends?

Better for the land

Organic wines come from the same grapes as ‘normal’ wines but the difference is that they are produced without the use of synthetic herbicides, fungicides and fertilisers.

Pest control is achieved by encouraging biodiversity. Flowering plants like clovers, vetch and mustards are sown between the rows to attract beneficial insects like hoverflies and ladybirds which naturally control pests like aphids and leafhoppers.

There are also aesthetic reasons why organic is gaining in popularity. Organic production is by necessity more labour intensive and ‘hands on’. When you buy organic you are buying something that is, in many ways, ‘hand crafted’.

French organic producers also believe that organic wine has a more authentic ‘terroir’ or regional character. Terroir is the result of a mixture of microclimate, altitude, geology, soil chemistry and unique yeasts which all combine to make a wine a unique product of wherever it is made.

Conventional wines, it is argued, have largely lost their sense of terroir, because it is all but destroyed by conventional industrial winemaking practices.

Good news or you too

But it’s not just the land that benefits from organic wine production. We do too.

Organic wine contains around half the sulphites of conventional wine – good news if you are sensitive to these food additive. Sulphur dioxide can cause allergic reactions particularly in asthmatics and some believe it makes for worse hangovers.

When it comes to wine, there is evidence that organic grapes also have more antioxidants and higher levels of resveratrol.

Resveratrol is a compound found in red grapes that has been shown to be beneficial to health by lowering cholesterol and preventing cell oxidation, an important process in the prevention of cancer, heart disease and other diseases of modern life.

Resveratrol occurs in grapes as a defence against low to moderate levels of  pathogen and insect attack. Spraying with pesticides halts this defence mechanism.

Hardly surprising then that in one study researchers found that grapes sprayed with fungicides commonly used on conventional vineyards had 80% less resveratrol.

Although both Europe and the US have standards for organic wine, there is endless confusion about what organic wine is and often the labels on the bottle offer very little in the way of clarity.

It could even be argued that, technically speaking, there is no such thing as organic wine since it is the grapes not the wine that are certified organic.

In Europe things were on the verge of changing when, in June 2010, the European Commission formally withdrew its proposal for organic wine standards.

This was due to member states failing to agree what these standards should be and in particular what limits should be set for sulphite levels.

Had the new regulations gone ahead wine would have, for the first time, been permitted to be labelled as ‘organic’.

Although there is a lack of specific EC regulation for wine, the grape production, processing, bottling and labelling will continue to be subject to the certification and inspection system by official bodies such as the Soil Association (UK), Ecocert (France) and AIAB (Italy). These requirements apply to anyone wanting to make any organic claims about their wine.

The spirit of organic

Around the world, some wine producers will follow the letter, but not necessarily the spirit, of organic production.

Others have adopted a wholly organic philosophy in the production of their wines, using only natural treatments in the vineyard in accordance with recognised organic practices. In addition to being organic some of these producers are also biodynamic.

Biodynamic is a concept originated by the early 20th-century Austrian philosopher Rudolf Steiner and in many ways is the ultimate organic. Inasmuch as it emphasises the holistic development and interrelationships of the soil, plants and animals as a self-sustaining system.

For instance, biodynamic wine growers may make their own compost and/or watch the stars and planets to time what they do.

Biodynamic growers also favour homemade ‘teas’ as epst control. These are made from soaking medicinal plants in freshly boiled rainwater to keep their vines healthy.

For example chamomile tea is used to prevent heat stress and valerian tea is used after frosts as a “winter warmer”.

Teas made from oak bark prevents mildews and grape rot from spreading whilst comfrey and nettle are used as a liquid feed to keep the vines stress free.

In the actual wine making process instead of adding yeasts (which is allowed under organic standards) biodynamic producers let the yeasts naturally present on the grapes do the fermentation.

The biodynamic wines “were found to have better expressions of terroir, the way in which a wine can represent its specific place of origin in its aroma, flavor, and texture.”

Throughout the world the kind of organic wine you can buy will vary enormously. What is more, biodynamic agriculture does not have a legal status distinct from organic so you may have to become a label-reader to find the type that you prefer.

But the effort can turn a simple pleasure into an expression of planet-loving activism. Cheers!