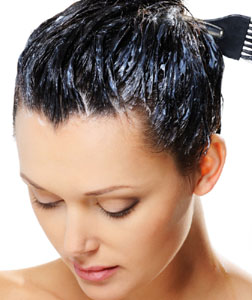 A recent newspaper article proclaimed that hair dyes are a cancer risk.

The ‘study’, which was reported on in the UK’s Daily Mail,was funded by a company about to launch its own brand of  ‘safer’ hair dyes and was not all that impressive – but the link between hair dye use and cancer is one that has been studied for years and should not be ignored.

In a culture obsessed with youth and beauty, grey hairs are the enemy and today’s hair dyes are marketed as being as good for your self-esteem as they are for your hair. But underneath the advertising hype is a disturbing amount of data linking regular hair dye use with a range of different cancers.

First you have to damage your hair…

To achieve luscious shades of chestnut brown, coppery red, mahogany or black, permanent hair dyes must first chemically damage your hair. Under a microscope, the cuticle of human hair looks like overlapping fish scales. The pigment molecules that give hair its colour are stored in the cortex of the hair, beneath this scaly layer. Before the colour can penetrate the hair shaft, the cuticle, must be ‘opened’ so that chemicals can get in to the natural pigment molecules.

Permanent hair dyes consist of a two components – colour and developer. The colour component usually contains a range of synthetic dyes and intermediates that such as ammonia, diaminobenzenes, phenylenediamines, resorcinol and phenols.

Mixed with the developer – usually hydrogen peroxide – the colour component begins to oxidise to produce a particular colour. The ammonia in the mix causes the hair shaft to swell, forcing the cuticles apart and allowing the mix to deposit the new colour underneath. Ammonia free formulas may smell nicer, but they simply replace ammonia with another chemical that does the same job.

The process of oxidation takes time, which is why the formula usually looks one colour when you first apply it and another when your rinse it off.

Toxic ingredients like diaminotoulene, diaminoanisole were removed from hair dye products some 20 years ago but it is likely that past use of dyes containing these chemicals is a cause of some cases of breast cancer today. But a quick label scan most hair dyes reveals that they contain chemicals, most commonly phenylenediamines which are just as harmful. The type of phenylenediamine used depends on the end colour, thus:

Other hair dye ingredients have also proven carcinogenic in at least one animal species including: 4-chloro-m-phenylenediamine, 2,4-toluenediamine, 2-nitro-p-phenylenediamine and 4-amino-2-nitrophenol. Regulation varies, but some of these have now been banned in hair colourants in some countries. Coal tar dyes have been also found to cause cancer in laboratory animals, yet no warning is required for these either.

These ingredients and their variations (usually HCl, hydrochloride or sulphates e.g. para-phenylenediamine sulfate) are powerful irritants and have been implicated in severe allergic reactions (phenylenediamines are also mutagenic (causing DNA mutations and fetal abnormalities in animal studies). Other irritant ingredients include hydrogen peroxide, resorcinol and 1-naphthol. Hair dye sold in the European Union containing any of these ingredients needs to carry a warning:

“Can cause an allergic reaction. Do not use to colour eyelashes or eyebrows.”

In the US products containing 4-methoxy-m-phenylenediamine (4-MMPD, 2,4-diaminoanisole) must also carry a warning:

“Contains an ingredient that can penetrate your skin and has been determined to cause cancer in laboratory animals.”

No such warning is required for this ingredient in the EU.

In the US the long  commercial use of many hair dye chemicals, especially coal tars, has allowed manufacturers to successfully argue that they cannot be withdrawn from the marketplace.

In the EU in 2007 over 100 hair dye substances suspected of toxicity were banned pending documentation supporting their safety for use. By 2009 44 of these had been put back on the market. In 2010 a further 179 hair colouring chemicals were banned within the EU.  But many of banned colours were less commonly used substances and plenty of toxins remain in our hair dyes and of course long-term users will have been exposed to those colourants that were eventually deemed dangerous and taken off the market.

Other hair dye ingredients such as chlorides are highly irritating to the mucus membranes. Chloride fumes can irritate the lungs and eyes and cause burns or rashes on the skin.

Hair colours also contain several penetration enhancers known the aid the absorption of other toxic chemicals into the bloodstream. These include can include propylene glycol, polyethylene glycol, fatty acids such as oleic, palmitic and lauric acid and isopropyl alcohol to name but a few.

Both human and animal studies show that the body rapidly absorbs the carcinogens and other chemicals in permanent and semi-permanent dyes through the skin during the more then 30 minutes that dyes remain on the scalp. So if you use permanent, semi-permanent, shampoo-in or temporary hair colours you are increasing your risk of developing cancer.

Problems with hair dyes were first noted in the late 1970s when several studies found links between the use of hair dyes and breast cancer. In 1976 one study reported that 87 of 100 breast cancer patients had been long-term hair dye users.

In 1979, another study found a significant relationship between the frequency and duration of hair dye use and breast cancer. Women who started dying their hair at age 20 had twice the risk of 40-year-olds. Those at greatest risk were the 50 to 79 year olds who had been dying their hair for years, suggesting that the cancer takes years to develop.

In addition, people who work as hairdressers are at increased risk. One 2001 study found that those who had worked for 10 or more years as hairdressers or barbers had a fivefold risk of bladder cancer compared to the general population.

Research continued and in the early 1990s Japanese and Scandinavian studies also linked hair dye use with leukaemia and ovarian cancer.

A recent review found what it called “alarming data” pointing toward a link between hair-dye use in pregnancy and the development of several childhood malignancies in offspring. The authors recommended that “Concerned pregnant women should avoid all hair colouring”.

But it is the link with otherwise uncommon cancers that causes the greatest concern, and may well be the best evidence of hair dye toxicity.

Evidence suggests, for example, that if you use hair dye you may be increasing your risk of non-Hodgkin’s lymphoma and multiple myeloma anywhere from two to four times over a non-user. Some researchers even believe that hair dyes may account for as many as 20% of all cases of NHL in women.

Other data from the 1992  National Cancer Institute (NCI) found that women who used permanent hair dyes had a 50% higher risk for developing non-Hodgkin’s lymphoma and an 80% higher risk of multiple myeloma than non-users.

In this study other cancer risk factors, such as family history of cancer, cigarette smoking, and herbicide or pesticide exposure, did not change the risks calculated for hair dye use and the risk increased with the number of years of use and for women using black, brown and red colouring products.

In 2008 Yale researchers found that women who used hair dye 6-9 times a year were at 60% greater risk of developing lymphocytic leukaemia.

As a general rule, the darker the shade of the dye, this higher the risk of breast cancer; thus women who use black, dark brown or red dyes are at the greatest risk.

Men at risk too

While women were once the main users of hair dyes, use among men has increased dramatically in the last few decades, and with it the incidence of rare cancers. According to the National Cancer Institute hair dye use is responsible for a 90% increased risk of multiple myeloma among men.

This result echoed that of an earlier NCI study which showed that men who had used hair dyes had a two-fold risk for non-Hodgkin’s lymphoma and almost double the risk of leukaemia.

Hair dye manufacturers continue to defend the safety of their products, suggesting that any risk is ‘minimal’. It is true that some studies dispute the cancer risk. One which involved 1500 men and women hair dye users in San Francisco found no increased incidence of NHL.

In fairness, there are problems with studies into hair dye and cancer risk. Some involve small numbers of women working in the cosmetic industry. Historically this group of women are exposed to the known carcinogens in hair dyes – diaminotoulene, diaminoanisole, and phenylenediamines, coal tar dyes, the dioxane found in detergents, solvents, nitrosamines and formaldehyde-releasing preservatives – in much greater concentration than the rest of us.

Another difficulty is that there are large variations in the chemical content of hair dyes. This means that when an association is found it difficult to know which ingredient or mix of ingredients is the culprit. In addition, cancer is a slow-developing disease in humans. By the time it surfaces, it is difficult to prove beyond a shadow of a doubt that one particular exposure was the cause.

However, the weight of the evidence, clearly suggests a need for caution.

You can tint your hair with natural substances like henna, but if you want to permanently dye your hair there aren’t really any ‘natural’ alternatives. Look closely at the labels of  ‘natural’ hair colours and you will find the same harsh colours – with a bit of added natural vegetable oil. If you intend to keep dying your hair consider some damage limitation:

Adapted from from What’s in this Stuff? by NYR Natural News editor, Pat Thomas

For more on toxic chemicals see our Environment section.