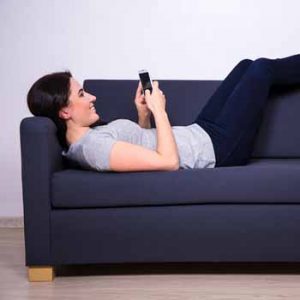 It may be comfy but chemicals in your sofa cold be damaging your thyroid.

Natural Health News — If you needed another good reason to get up off the sofa here it is: scientists have discovered a link between the flame retardants used in furniture and a rise in the most common type of thyroid cancer, papillary thyroid cancer (PTC).

“Thyroid cancer is the fastest increasing cancer in the U.S., with most of the increase in new cases being papillary thyroid cancer,” said the study’s lead investigator, Julie Ann Sosa, MD, MA, professor of surgery and medicine at Duke University School of Medicine in Durham, North Carolina. “Recent studies suggest that environmental factors may, in part, be responsible for this increase.”

Many animal studies have demonstrated that several classes of flame retardants act as endocrine-disrupting chemicals and interfere with thyroid homeostasis (function), partly because they share a similar chemical structure with thyroid hormones.

» US scientists have found a link between exposure to common flame retardants used in household furniture and an increased risk of common type of thyroid cancer, papillary thyroid cancer (PTC).

» Two PDBEs – decabromodiphenyl ether (BDE-209) and tris(2-chloroethyl) phosphate (TCEP) – were associated with an increased risk of having PTC and in the case of the latter with larger and more aggressive tumours.

They also collected blood samples from the participants to gauge body levels of several flame retardants in the class known as polybrominated diphenyl ethers (PBDEs).

In all they looked at samples from the homes of 140 study subjects: 70 with PTC and 70 individuals without evidence of thyroid disease or cancer.

All of the participants had lived in their homes for an average of 11 years, a fact which allowed researchers to assess long-term average exposure to these environmental chemicals.

What they found was that higher levels in house dust of two flame retardants – decabromodiphenyl ether (BDE-209) and tris(2-chloroethyl) phosphate (TCEP) – were associated with an increased risk of having PTC.

Participants whose BDE-209 levels in their dust were high were more than two times as likely to have thyroid cancer than those individuals with low BDE-209 concentrations. Those with the highest dust levels of BDE-209 were 14 times as likely to have a non-aggressive form of PTC (one that did not have the genetic mutation BRAF V600E).

Participants with high levels of TCEP in their house dust were more than four times as likely to have larger, more aggressive tumours that extended beyond the thyroid, according to the data which was presented ahead of publication at the recent Endocrine Society’s 99th annual meeting in Orlando, Florida.

This the second study in recent months to suggest harm from flame retardant exposure. In March we reported on a study which found that these chemicals added to furniture, electronics and numerous other goods may have harmful developmental consequences for young children.

It may be comfy but chemicals in your sofa cold be damaging your thyroid.