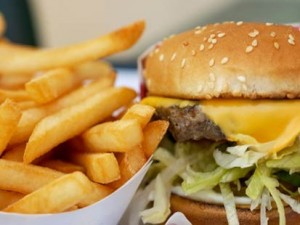 No surprises here; people eating a diet high in fat, salt and sugar are at risk from many chronic diseases

Diet holds the key to health – or illness – as we age

Natural Health News — If you want to live to a healthy old age avoid a Western-style diet.

According to a group of French researchers, people who eat this kind of diet – which typically consists of fried food, processed food and red meat, pies, sweetened desserts, chocolates, refined grains, high-fat dairy products, and condiments – are at increased risk for premature death.

And those who do make it to old age are less likely to be in good health when they get there.

Although the impact of diet on specific age-related diseases has been studied before, few investigations have adopted a more holistic approach.

The researchers, therefore, sought to identify dietary factors that can not only prevent premature death, but also promote ideal aging as well as looking at those factors that promote disease.

After 16 years, according to the report in the American Journal of Medicine, 73% of the participants had experienced normal aging and 4% had undergone ideal aging, defined as the absence of chronic diseases and mental health problems, as well as good cardiometabolic, respiratory, musculoskeletal and cognitive function.

In addition 7% of the participants had a nonfatal cardiovascular event, 3% died from heart-related causes and 13% died from other causes.

In order to understand the role of diet in these health outcomes, the investigators used the Alternative Healthy Eating Index (AHEI) as a yardstick to measure healthy eating. The AHEI is derived from the Healthy Eating Pyramid devised by Harvard School of Public health scientists, see here for more.

Overall sicking closely to the AHEI diet which recommends a high intake of vegetables, fruits, and fish meant a longer life and better ageing.

On the other hand those whose diet most closely resembled the Western diet were nearly 50% less likely to reach ideal aging, a figure that dropped a little bit to 42% after adjusting for smoking and physical activity.

Other disadvantages associated with the Western diet included 45% poorer musculoskeletal status, as measured by walking speed, and 58% worse cognitive function.

Lead researcher, Dr Tasnime Akbaraly, of the National Institute of Health and Medical Research in France, said: “We showed that following specific dietary recommendations such as the one provided by the AHEI may be useful in reducing the risk of unhealthy ageing, while avoidance of the ‘Western-type foods’ might actually improve the possibility of achieving older ages free of chronic diseases.”

No surprises here; people eating a diet high in fat, salt and sugar are at risk from many chronic diseases