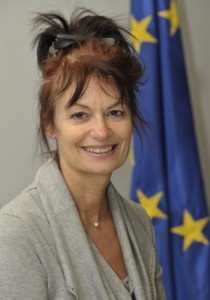 You may not know her face, or her name, or anything about her at all, but Anne Glover is leading the charge to bring GMOs to the EU

Anne Glover – off to promote GMOs in Ethiopia – is being heavily criticised for the claims she is making for GM technology.

Next week Prof Glover, who is the European Commission’s Chief Scientific Advisor, will join other pro-GM evangelists in Addis Ababa selling their rusted “silver bullets” and snake oil technology packages to African researchers, governments and the “civil society” elites.

In recent years her pronouncements on the safety of genetic engineering technology and the need for it have led to ferocious criticism from European Parliamentarians (MEPs) and NGOs. But her forthcoming trip – originally to be alongside the rabidly pro-GM UK government minister Owen Paterson – has sparked the sharpest attacks on her to date.

Dr. Brian John of GM-Free Cymru has raised questions about Prof Glover’s scientific integrity over her denial of evidence for health and environmental risks from genetic engineering technology.

Glover has repeatedly said there is no evidence of such risks and has written that “this has been confirmed by thousands of research projects”.

In a letter which has been posted on several websites, Dr. John asks her to retract these statements and apologise to those independent researchers who have been working hard to gather information about these risks. Prof Glover has replied – in an email exchange which has not been posted – reaffirming her position.

Doubts about responsibility and trust

The former French Environment Minister and leading MEP Corinne Lepage has been a stern critic of Glover’s position:

“Glover has as such taken on a heavy amount of personal responsibility, going so far as to say the precautionary principle is no longer applicable. If in the coming years, evidence on the toxicity of GMOs comes to light, European citizens would be entitled to ask her for an explanation.

Only time will tell.Meanwhile, her exaggerated stance is not in keeping with science, which progresses through doubt and research, nor what European citizens expect of the European institutions, in which they must put their trust to protect their health and environment, nor is it in the interest of Europe.”

Professor Glover’s perspective would be more convincing if the European Food Standards Authority (EFSA), the body responsible for licensing GM crops in the EU, was genuinely independent, impartial, transparent and evidence based.

Its GM advisory panel has been dominated by GM industry sponsored people.

In the recent past the panel’s chairperson was forced to resign after her close ties to the industry were exposed and the European Parliament refused to sign off the EFSA accounts because of its repeated failures to establish robust protocols to deal with overly cosy industry relationships.

There is a systemic lack of transparency and independent research verification in its evaluation procedures; a working presumption in favour of GM applications and an unwillingness to adopt new investigative methodologies.

Professor Glover is being remarkably disingenuous to say that there is no evidence that GM has any impact on the environment.

The emergence of “superweeds” and the contamination of non-GM crops in the US are clear to see; evidence of pest resistance is now being reported; as are examples of health disorders in laboratory animals.

At present this does not amount to a conclusive case against GM but it is enough to maintain precaution and is certainly enough to require that publicly funded officials – which Professor Glover is – and EFSA, take a more sober and considered view about GM technology.

Since when has the job description of the EU’s Chief Scientist included the role of lead cheerleader and saleswoman for the GM industry?

Professor Glover says she wants less politics, less emotion and more science in the GM debate. It is ridiculous of her to suppose that decisions about this technology can – or should – be based solely on a scientific perspective.

There is clear emerging evidence of problems and declaring that GM is risk free is profoundly unscientific.

According to Dr John: “The fact of the matter is that there is a powerful case showing that GMOs are harmful, with the findings of many early papers substantiated and confirmed by subsequent research. To deny that case is to perpetrate a falsehood.”

Which is what critics fear will happen in Addis Ababa.

Citizen stakeholders and small farmers will not be at the workshops in Addis Ababa – nor will any other dissenting voices. The workshops have been organised by the European Academies Science Advisory Council (EASAC), which purports to be one of the world’s leading scientific bodies. But it increasingly looks and sounds hand in glove with the GMO industry.

The denial of evidence; and misleading to the point of falsification is almost becoming the standard currency of scientists promoting genetic engineering technology. There are obviously notable exceptions but the overall perspective is profoundly disturbing.

Citizens in Africa, in the EU and indeed throughout the world, deserve better.

You may not know her face, or her name, or anything about her at all, but Anne Glover is leading the charge to bring GMOs to the EU