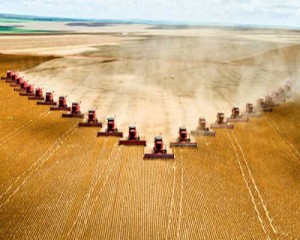 We may be eating more, but we are not eating better and the way we eat – which is fast becoming a dietary monoculture – is leading us down the path to global food poverty.

That is the conclusion of two recent reports on global food supplies.

The first is a comprehensive new study, relying on data from the Food and Agriculture Organization of the United Nations (FAO), that encompassed more than 50 crops and over 150 countries (accounting for 98% of the world’s population) during the period from 1961-2009.

Published in the Proceedings of the National Academy of Sciences (PNAS), it confirms and thoroughly documents for the first time what experts have long suspected: over the last five decades, human diets around the world have grown ever more similar – by a global average of 36% – and the trend shows no signs of slowing, with major consequences for human nutrition and global food security.

“More people are consuming more calories, protein and fat, and they rely increasingly on a short list of major food crops, like wheat, maize and soybean, along with meat and dairy products, for most of their food,” said lead author Colin Khoury, a scientist at the Colombia-based International Center for Tropical Agriculture (CIAT), which is a member of the CGIAR Consortium – an international organisation focused on food security.

“These foods are critical for combating world hunger, but relying on a global diet of such limited diversity obligates us to bolster the nutritional quality of the major crops, as consumption of other nutritious grains and vegetables declines.”

Although the study shies away from such details, ‘bolstering’ crops relies on fertilisers, which can over time have devastating impacts on soil health and the nutritional quality of our foods, and most recently has encompassed genetic modification, which promises, but has so far failed to deliver – enhanced nutrition.

The new study suggests that this dietary monoculture may also accelerate the worldwide rise in obesity, heart disease and diabetes, which are strongly affected by dietary change and have become major health problems, “even within countries still grappling with significant constraints in food availability.”

It calls for urgent efforts to better inform consumers about diet-related diseases and to promote healthier, more diverse food alternatives.

The research reveals that the crops now predominant in diets around the world include several that were already quite important a half-century ago – such as wheat, rice, maize and potato.

But the emerging “standard global food supply” described by the study also consists of energy-dense foods that have risen to global fame more recently, like soybean, sunflower oil and palm oil. Wheat is a major staple in 97.4% of countries and rice in 90.8%; soybean has become significant to 74.3% of countries.

In contrast, many crops of considerable regional importance – including cereals like sorghum, millets and rye, as well as root crops such as sweet potato, cassava and yam – have lost ground.

Many other locally significant grain and vegetable crops – for which globally comparable data are not available – have suffered the same fate.

For example, a nutritious tuber crop known as Oca, once grown widely in the Andean highlands, has declined significantly in this region both in cultivation and consumption.

“Another danger of a more homogeneous global food basket is that it makes agriculture more vulnerable to major threats like drought, insect pests and diseases, which are likely to become worse in many parts of the world as a result of climate change,” said Luigi Guarino, a study co-author and senior scientist at the Global Crop Diversity Trust, headquartered in Germany (see also Harvard School of Public Health’s web primer on Biodiversity for more).

“As the global population rises and the pressure increases on our global food system, so does our dependence on the global crops and production systems that feed us. The price of failure of any of these crops will become very high.”

As the authors probed current trends in food consumption, they documented a curious paradox: as the human diet has become less diverse at the global level over the last 50 years, many countries, particularly in Africa and Asia, have actually widened their menu of major staple crops, while changing to more globalised diets.

“In East and Southeast Asia, several major foods, like wheat and potato, have gained importance alongside longstanding staples, like rice,” Khoury noted. “But this expansion of major staple foods has come at the expense of the many diverse minor foods that used to figure importantly in people’s diets.”

The dietary changes documented in the study are driven by powerful social and economic forces. Rising incomes in developing countries, for example, have enabled more consumers to include larger quantities of animal products, oils and sugars in their diets.

“Countries experiencing rapid dietary change are also quickly seeing rises in the associated diseases of over-abundance,” said Khoury. “But hopeful trends are also apparent, as in Northern Europe, where evidence suggests that consumers are tending to buy more cereals and vegetables and less meat, oil and sugar.”

Not a lone voice

The international study comes at the same time as a the United Nations Special Rapporteur on the right to food, Olivier De Schutter, called for the world’s food systems to be radically and democratically redesigned to ensure the human right to adequate food and freedom from hunger.

In his final report to the UN Human Rights Council after an impressive six-year term as Special Rapporteur, De Schutter warned:

“The eradication of hunger and malnutrition is an achievable goal. However, it will not be enough to refine the logic of our food systems – it must instead be reversed,” De Schutter stresses.

Our current food systems, he says, are efficient only from the point of view of maximising agribusiness profits: “At the local, national and international levels, the policy environment must urgently accommodate alternative, democratically-mandated visions.

“Objectives such as supplying diverse, culturally-acceptable foods to communities, supporting smallholders, sustaining soil and water resources, and raising food security within particularly vulnerable areas, must not be crowded out by the one-dimensional quest to produce more food.”

Why should we care?

Amidst the ‘plenty’ that many of us see in our supermarkets, the notion that there might come a time when there isn’t ‘enough’ can be difficult to grasp. And yet every aspect of our food system is currently geared towards increasing food poverty – a problem that will affect the health, wealth and wellbeing of most vulnerable in the world first.

For example, our supermarkets love to put pictures of small farmers on food packets to make us believe that we are ‘helping at a distance’. This may be true up to a point.

But it is also true that by pressing small farmers into growing monoculture crops like maize, soya and rice for the global market, we prevent them from growing locally nutritious foods which will sustain them better and for much longer than the often slim profits they make from being part of the global ‘system’ (for more on this see Action Aid’s report Fertile Ground, here).

Indeed at a recent agricultural summit in London it was observed that small scale farmers are both “invisible and irrelevant” to the future development of the global food system as envisaged by banks and big agricultural firms.

And then there’s GMOs

Likewise when proponents of GMOs, for example, say that planting more GM crops will feed the world, they singularly fail to take into account the fact that there are only four main GM crops currently authorised for sale: maize, soya, canola (rapeseed) and cotton. Even if we wanted to we could not feed the world with these crops – and that is before we even get into the argument that eating them may be toxic anyway.

They fail to admit that most other GM crops are experimental at best. The GM Golden Rice is a good case in point. No child has starved for want of it – it is not authorised for sale or consumption anywhere in the world. Indeed the GM process that has created it, and the potential safety or otherwise of eating it is so poorly researched that no regulator knows how to regulate it (click here for more on GM Golden Rice).

What all this means is that it is simply not enough to ‘feel sorry’ for people who are hungry or to feel so overwhelmed by the problem that you acquiesce to the first ‘solution’ – however faulty – that comes along. In fact, anyone offering a simple solution to future food security, such as GMOs, clearly hasn’t grasped the full scale of the problem.

Even if you don’t consider yourself an activist, you must accept that every decision we take, collectively and individually, regarding food can take us closer to or further away from food security.

Taking radical action doesn’t always mean taking to the streets with a placard and a megaphone. It can simply mean refusing to buy into the global monoculture.

We have written previously on this site about the need for dietary diversity from a health perspective. But agricultural diversity also ensures greater food security on a global scale. Taking this concept to heart, and consciously acting on it, may be the most radical thing any of us can do.

It can mean growing your own whenever and wherever possible. It can mean buying locally on a regular basis instead of buying into the supermarket trap. It can mean trading your reliance on pre-prepared foods for foods you make yourself, food whose ingredients you know and understand.

It can mean supporting organic farming – which has at its heart a respect for the biodiversity of the soil and the wider environment and, because of its emphasis on seasonality, contributes to making our diets more diverse as well.

These steps lead to others as well as to a more profound understanding of the food system. If we all took them together we could put our feet on the road to greater food security and bring some of the world’s most vulnerable people along on the journey.