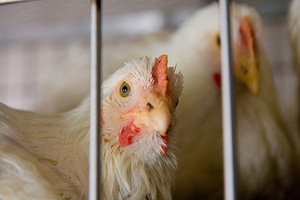 Why is the government ignoring the role of livestock in antibiotic resistance?

Antimicrobial resistance is a ticking time-bomb not only for the UK but also for the world, warns the UK’s Chief Medical Officer, Professor Dame Sally Davies.

The evidence behind the warning is summed up in the second volume of CMO’s annual report comes as the UK  prepares to launch a new Antimicrobial Resistance Strategy and Action Plan, reflecting the need for a clear change in our understanding of and response to antimicrobial resistance by the public, NHS and government.

The knighted professor urged Britain to raise the issue at a G8 foreign ministers’ meeting in London next month.

“We need to work with everyone to ensure the apocalyptic scenario of widespread antimicrobial resistance does not become a reality. This threat is arguably as important as climate change for the world, Davies said.

She added: “Antimicrobial resistance poses a catastrophic threat. If we don’t act now, any one of us could go into hospital in 20 years for minor surgery and die because of an ordinary infection that can’t be treated by antibiotics.

According to a report in the British Medical Journal (BMJ), also published this week, current estimates suggest that in comparison to other problems antibiotic resistance is not a costly problem for the NHS. But such estimates do not take account of the fact that antimicrobial medicines are integral to modern healthcare. For example, antibiotics are given as standard to patients undergoing surgery, to women delivering by caesarean section, and to those having cancer treatment.

Although it is difficult to forecast the likely economic burden of resistance, they believe that even the highest current cost estimates “provide false reassurance” and this may mean that inadequate attention and resources are devoted to resolving the problem.

The authors conclude that a change in culture and action is needed to plan for a future with more antibiotic resistance: “Waiting for the burden to become substantial before taking action may mean waiting until it is too late. Rather than see expenditure on antimicrobial policies as a cost, we should think of it as an insurance policy against a catastrophe; albeit one which we hope will never happen.”

The UK’s five year plan has yet to be published but in an accompanying editorial, Professors Anthony Kessel and Mike Sharland say it “represents an important step in both recognising and responding to this significant threat.”

The problems are global and the terminology complex, but the importance is clear, they write. “A fundamental standard of the NHS should include basic high quality routine infection control and clinical care, as noted by the Francis inquiry. These standards of care are crucial to the prevention and control of all healthcare associated infections, including multi-drug resistant Gram negative bacteria.”

If it all sounds scary that’s because it is. And yet the CMO’s report and the screeds of media coverage and accompanying related reports in medical journals all fail to mention one of the biggest influences on the problem: the widespread use of antibiotics in livestock production as stealth growth promoters.

Will the ‘five year plan’ pay any attention to this important issue?

Currently more than half of all global antibiotic use is in farm animals, most commonly in the pig, poultry and dairy sectors, where they are used as to promote growth and to fight the infections endemic in the unacceptably crowded, stressful and unhygienic factory farm conditions in which commercial livestock is reared.

In the US the figure is even more shocking: 80% of the antibiotics sold there go to chicken, pigs, cows and other animals destined for the food chain. Yet producers are not required to report on which drugs they use, what types of animals are receiving them and in what quantities.

Much like the EU the US government has dragged its feet for 30 years on this issue. And yet last year figures released by the federal government showed that the problem of resistant bacteria in meat is growing, in some cases by as much as tenfold.

These antibiotics enter our food chain, our soil and our water supply and find their way into our bodies. It’s an issue we consider very important and one we’ve covered in some depth on this site (see links opposite),

We must look at the bigger picture

In 2011 three environment and animal welfare groups, The Soil Association, Sustain and Compassion in World Farming, announced they had formed the Alliance to Save Our Antibiotics – a campaign that calls for:

At its launch the Alliance also produced a report Case Study of a Health Crisis that threw a spotlight on the link between excessive antibiotic use on farms and the rise in antibiotic resistance and incidence of superbugs – such as E. coli and MRSA – in humans.

As the CMO released her statement this week, the Alliance also released a new report Antibiotic resistance – the impact of intensive farming on human health that shows the Government is still not facing up to the issue of excessive use of antibiotics on farms.

The EU recognises the antibiotic/livestock threat

The 2011 launch of the Alliance came as the European Commission launched a 12-point plan to tackle antibiotic resistance and called for farmers play a key role. So it’s not as if this issue is floating around somewhere beneath the radar of our politicians and policy-makers.

It’s an interesting to ponder the question, then, of why the Chief Medical Officer, concerned as she is about our health, did not acknowledge this important facet of the problem.

Instead of pointing the finger of blame at a simplistic nexus of anxious patients and overworked doctors, as the CMO was happy to do in most of her interviews this week, when the G8 ministers meet in London next month we would urge them to put political point scoring and media grandstanding aside and broaden their view to include placing rational and long-overdue restrictions on the frivolous use of antibiotics in farming.