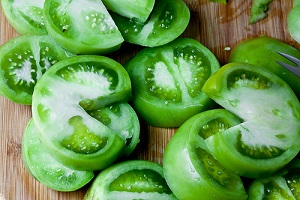 Natural Health News — As unlikely as it sounds, green tomatoes may hold the answer to bigger, stronger muscles.

In a new study a team of University of Iowa scientists has  discovered that tomatidine, a compound from green tomatoes, has a potent muscle-building activity and may even help protect against muscle atrophy [sarcopenia].

Muscle atrophy, or wasting, is caused by aging and a variety of illnesses and injuries, including cancer, heart failure, and orthopedic injuries, to name a few. It makes people weak and fatigued, impairs physical activity and quality of life, and predisposes people to falls and fractures.

In the US alone, it affects more than 50 million Americans annually, including 30 million over age 60, and often forces people into nursing homes or rehabilitation facilities.

“Muscle atrophy causes many problems for people, their families, and the health care system in general,” says lead researcher Christopher Adams, MD, PhD, UI associate professor of internal medicine and molecular physiology and biophysics. “However, we lack an effective way to prevent or treat it. Exercise certainly helps, but it’s not enough and not very possible for many people who are ill or injured.”

The research, published in the Journal of Biological Chemistry, found that tomatidine works at a molecular level, generating changes in gene expression that are essentially opposite to the changes that occur in muscle cells when people are affected by muscle atrophy.

“That result was important because we are looking for something that can help people,” Adams says.

Interestingly, while mice fed tomatidine had larger muscles, their overall body weight did not change due to a corresponding loss of fat, suggesting that the compound may also have potential for treating obesity.

An attractive aspect of tomatidine is that it is a natural compound derived from tomatoes. It is produced when alpha-tomatine, which is found in tomato plants and in green tomatoes in particular, is digested in the gut.

We still don’t know how many green tomatoes a person would need to eat to get a dose of tomatidine similar that used in this study. The researchers have set their sights on answering that and other questions, but feel that tomatadine has real potential to be a useful natural supplement.