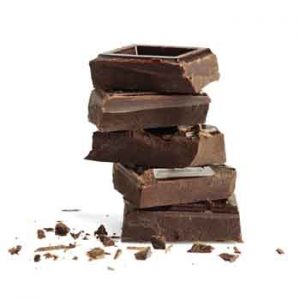 Low fat chocolate may not be the healthiest option. [Photo: Bigstock]

By running liquid chocolate through an electric field, researchers were able to make it flow more easily – and that means may not need to add so much fat to finished chocolate bars.

The fat content of natural raw chocolate can vary widely – anywhere from 12 – 50%. But during processing, manufacturers often take out the natural cocoa butter and add other types of fat, often in higher amounts to create a smooth end product.

According to the University in Philadelphia researchers, writing in the Proceedings of the National Academy of Sciences, during production, chocolate is handled as a liquid that includes solids like cocoa suspended in melted fat and oil.

» An experiment funded by a major chocolate company has shown that bombarding chocolate with electricity can lead to a reduction of fat content in the finished bar.

» This is because the electrical charge changes the microstructure of the chocolate making it flow more easily during manufacture – meaning it requires less added fat.

» Although heralded as a breakthrough in the media, the low-fat chocolate is not coming to a shop near you anytime soon – and the current study did not test key aspects such as taste and effect on storage times.

A certain level of fat is needed to let the chocolate flow easily enough to be processed, they said. But they found an electric field can encourage flow too.

Scientists at the University of Philadelphia applied a technique called electrorheology, which they say successfully altered the micro-structure of chocolate in a way that made it flow more easily.

This structural change could reduce the fat content in a finished bar by about 10%, said researcher Rongjia Tao. In theory, they could reduce it by up to twice that much, he added

The experiment was partially financed by the Mars chocolate company, and Temple University in Philadelphia holds patents on the technique.

Is fat really the problem with chocolate?

There was no scientific evaluation of how the treatment affects taste and texture. Nor did the researchers test whether the treated chocolate would remain appealing after time in storage so we have a long way to go before this experiment can really be called a breakthrough.

In the meantime it’s worth asking whether fat is really the problem when it comes to chocolate.

The fact is that chocolate – the minimally processed kind – is a food with many health benefits. In addition mounting scientific evidence suggests that sugar – not fat – is the major cause of so many modern diseases including obesity heart disease and cancer.

There is even some evidence to suggest that low-fat foods can actually cause us to gain, not lose weight. A recent report from the UK’s National Obesity Forum called the trend for low -fat diets a “health time-bomb“.

To make highly processed low fat foods palatable they are often bulked up sugar and other fillers – so while they may fill you up they offer very little in terms of vital nutrients.

If the lower fat chocolate turns out to be less tasty we could see manufacturers adding more sugar to compensate – and while the finished product could be labelled lower fat – it certainly wouldn’t be healthier by any rational measure.

Low fat chocolate may not be the healthiest option. [Photo: Bigstock]