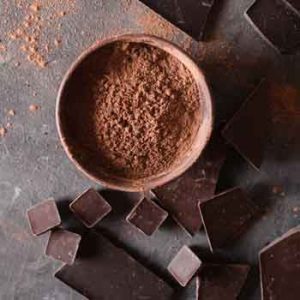 A new study has found that habitual chocolate eaters may have sharper brains. [Photo: Bigstock]

Natural Health News — We could all use some happy news, so here it is: People who eat chocolate at least once a week seem to have sharper brains, according to recent research.

The 30-year study is one of the first to link regular chocolate consumption over the long-term with better brain performance.

According Dr Georgie Crichton, one of the study’s lead authors, chocolate could also help protect against age-related memory decline.

“Chocolate and cocoa flavanols have been associated with improvements in a range of health complaints dating from ancient times, and have established cardiovascular benefits, but less is known about the effects of chocolate on neurocognition and behaviour,” he said.

In real terms, Crichton said, the results show that regular chocolate consumption improved the kind of brain power we need to do things like remembering a phone number, or a shopping list, or being able to do two things at once, like talking and driving at the same time

Over 1,000 people were tracked over three decades. They were given a series of health and cognitive variables were measured which revealed that regular chocolate eaters performed better on tests of working memory, reasoning and attention.

» Previous studies have shown that brain function improves immediately after a cocoa drink, but no studies have looked at habitual chocolate consumption and brain power.

» A recent study looked at habitual chocolate consumption and found that those who ate chocolate at least once a week performed better in several cognitive tasks.

» The brain benefits, say the researchers, translate into everyday actions like remembering a phone number, or your shopping list, or being able to do two things at once, like talking and driving at the same time.

With the exception of working memory, the links the researchers found did not change when they took into account other risk factors such as cardiovascular health, lifestyle and dietary factors.

Even after adjusting for such factors the relationship between chocolate intake and cognitive function remained significant.

Previous research has mostly examined the acute effects of increasing chocolate consumption on cognition, (i.e. performance) immediately after consuming a chocolate bar/cocoa drink. But this study differs in that it looked at habitual intake.

The study was published in the journal Appetite echoes some of the findings of previous studies.

For example, a 2011 study found that cocoa flavanols “positively influence psychological processes.” In 2014, another study concluded that eating the nutrient can “reduce some measures of age-related cognitive dysfunction.”

In addition to flavanols, chocolate, like both coffee and tea, also has methylxanthines, plant produced compounds that enhance various bodily functions. A number of studies have shown this, including one in 2004, and another in 2005.

This new study didn’t look at different types of chocolate and the researchers say that this and more specific looks at frequency of consumption may reveal even more interesting data.

A new study has found that habitual chocolate eaters may have sharper brains. [Photo: Bigstock]