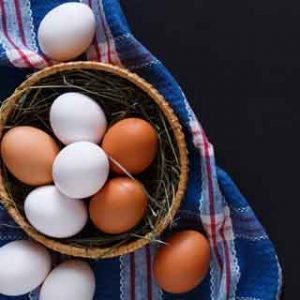 Natural Health News — Free-range and organic eggs help put a bit of sunshine into your diet, according to new evidence.

Eggs from chickens that are allowed to roam outdoors contain more vitamin D than those from birds that are kept in dark sheds or cages, according to a study from the University of Reading, published in the journal Food Chemistry.

But eggs from organic farms – which allow hens the most freedom of all – also have elevated levels of 25-hydroxyvitamin D3, a highly bioavailalbe precursor of vitamin D that is easily converted into the active form of D3 in the body

According to the scientists: ‘The vitamin D nutrition of birds is similar to that of humans; vitamin D is either synthesised by ultraviolet radiation from sunlight or consumed in the diet.”

» A new study  has shown that eggs from free range and organic hens have 42% more vitamin D in them than those from indoor hens.

» Hens produce vitamin D in the same way humans do, through exposure to sunlight.

» Just one egg a day from an outdoor bred hen could supply 20% of the average daily requirement and help to address rising levels of vitamin D deficiency.

20% of your daily requirement

They suggest that, one egg per day, from a free range or organic bird, would contribute about 20% of the recommended daily intake of vitamin D – though very high temperature cooking can lead to loss of vitamin D in eggs.

Unlike the intensive indoor egg production system, free range and organic birds have more opportunity to be exposed to sunlight as they can access pasture continuously during the day.

Vitamin D, known as the sunshine vitamin, is primarily produced through exposure to sunlight. And the free-range chickens had more time in the sun.

This is not a new finding, of course, but it is one we should be paying attention to. In 2014 a German study also found that the yolks of eggs laid by hens with access to the outdoors had a vitamin D3 content three- to fourfold higher than those kept indoors.

Millions of people around the world are thought to be deficient in vitamin D. While controversy reigns over how and how much to supplement, what is clear is that insufficient levels of vitamin D in humans are linked to an increased risk of rickets, osteoporosis, multiple sclerosis, high blood pressure, diabetes, cancer and other diseases. Vitamin D also regulates calcium intake and the immune system, and can help fight depression.

Only a few foods, including eggs (specifically the yolk), are a good source of vitamin D. Other natural sources include red meat, liver, tuna, herring, salmon, shrimp and mushrooms. Vitamin D is also often added to milk, cereal, and yogurt.

The study was, in part, focused on highlighting the importance of correct food labelling on eggs (vis a vis how they are produced) so that consumers can know exactly what they are getting.