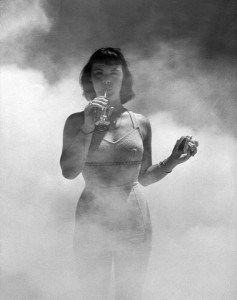 A model in 1948 is used to show that DDT is perfectly safe and won't contaminate her hot dog and coke [Image: George Silk/Life]

The warning follows the discovery that adults with high serum concentrations of organochlorine pesticides such as DDT also have lower vitamin D levels.

Vitamin D deficiency has similarly been associated with a rise in these diseases, but previously the two have been studied separately by researchers in different fields.

Now, a team of US and Korean researchers have made the link.

The team studied 1275 adults in the US aged 20 years or older and checked their blood for seven organochlorine pesticides. DDT and beta-hexachlorocyclohexane in study volunteers were associated with lower serum concentrations of a vitamin D pre-hormone, 25-hydroxyvitamin D, which is the standard way to assess vitamin D levels in the body.

One of the early warning sings of the toxicity of DDT was the thinning of egg shells in wild bird populations. Egg shell thickness is regulated by vitamin D and this study suggests that the same suppression of vitamin D occurs in humans.

Unfortunately the study does not speculate on exactly how pesticides influence vitamin D levels in the body.

Banned but not forgotten

Organochlorine pesticides, such as DDT and beta-hexachlorocyclohexane were actually banned in most of the developed world more than 30 years ago, but levels of the toxins are still widely found in people – even those born after they were banned – because the chemicals do not easily breakdown in the environment, accumulating instead into the fat cells of animals and can be passed along the food chain.

In the developing world, however, DDT is still used to control mosquito populations in countries where mosquito-born illnesses such as malaria and dengue fever pose serious threats to human health.

Levels of these chemicals in the environment are far lower than they were in the 1960s and 1970s, but the study’s lead author Duk-Hee Lee of Kyungpook National University in Korea believes that they may still be significant because they act as endocrine disruptors.

“One characteristic of endocrine disruptors is that they show their possible harmful effects at levels lower than those which we currently think are safe,” Lee says. “As chemicals like organochlorine pesticides travel a long distance through a variety of ways, humans can be exposed to these kinds of chemicals even though the country where they live does not use them any more.”

As climate change forces mosquitoes into wider and wider territories globally, there are calls to bring DDT back into use in the developed world it’s vital that we understand that it is harmful DDT is to humans, not just mosquitoes.

A model in 1948 is used to show that DDT is perfectly safe and won't contaminate her hot dog and coke [Image: George Silk/Life]