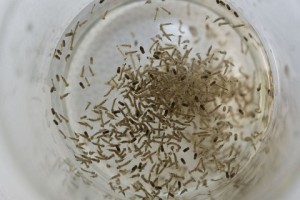 Antibiotic resistance is recognised to be a major problem for human and animal health as it makes treatments for many bacterial infections ineffective. Bacteria that are resistant to multiple antibiotics are sometimes known as “superbugs”.

In a new report, Genetically Modified Insect Factories: A New Source of Superbugs?, campaigning groupGeneWatch UK publishes evidence that UK company Oxitec has developed GM mosquitoes and agricultural pests which are bred using the common antibiotic tetracycline in their feed.

The report explores concerns that mass-breeding and repeated large-scale open releases of such GM insects could spread antibiotic resistance into the environment, potentially creating more superbugs.

“Mass production of GM insects in factories, using antibiotics as an additive in their feed, could lead to drug resistance in bacteria, leading to the spread of superbugs as billions of insects are released into the environment in future” warned Dr Helen Wallace, GeneWatch UK’s Director, “This important risk to human health has been ignored by regulators, despite bans on the use of antibiotics in animal feed in many countries”.

Genetically modified insects are an experimental method of pest control, involving large-scale releases of GM insects worldwide (including mosquitoes and agricultural pests) in an attempt to reduce the ‘vectors’ carrying diseases such as malaira and dengue fever. Repeated very large-scale releases of GM insects are required to suppress wild insect populations and it is not yet clear whether this form of pest control can be successful.

Claims to have achieved temporary suppression of mosquito populations during its experiments in Brazil, it has yet to publish any evidence of this or to show any reduction in the tropical disease dengue fever which it is targeting. In fact, a dengue emergency has been declared in one of the areas where Oxitec has been conducting its experiments.

According to the authors of the new report, many concerns have been raised about the release of large numbers of GM insects into the environment, and about the poor quality of the risk assessments that have been conducted. This new report focuses on just one: the increasing risk of antibiotic resistance.

A new kind of superbug

Large-scale experimental releases of tens of millions of Oxitec’s GM mosquitoes are already taking place in Brazil and Panama, without considering this important risk, and releases are being considered in the Florida Keys. Oxitec’s GM fruit flies have been approved for release in Brazil, although these experiments have not yet taken place, and Oxitec is awaiting approval for experimental releases of GM diamondback moths in New York State. The company withdrew an application to release GM olive flies in Spain last year.

If commercial uses were to take place in the future, many billions of Oxitec’s GM insects would be released year after year in attempts to suppress wild pest insect populations over vast areas and perhaps whole countries. If such GM ‘superbug’ insects became a new source of antibiotic resistance worldwide, this could have serious adverse impacts on human and animal health.

The GM insect experiment is, in part, a response to changing climate and the way that this has broadened the global territory over which infectious diseases, carried by insects, can be spread. We have written about this previously in our article How a changing climate could affect our health.