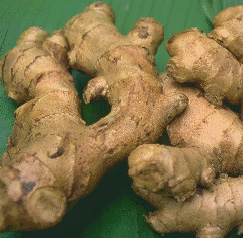 Ginger root may prevent the inflammation that is an early sign of colon cancer.

Natural Health News — Ginger, the root of the plant Zingiber officinale, has been popular for many years with chefs for its warming taste and with herbalists for its medicinal properties. Now scientists say it may help to combat colon cancer.

Researchers from the university of Michigan randomly assigned a select group of 30 patients to take either 2 g a day of ginger supplement or placebo for 28 days. They took biopsy colon samples from the participants at the start of the study and then again on day 28 to assess levels of prostaglandin E2 (PGE2) and other biomarkers (chemicals in the body) known as eicosanoids in the colon tissue in a select group of patients.

Eicosanoids are signalling molecules that control the inflammatory response of the immune system.   A rise in PGE2 levels is also associated with inflammation. Colon inflammation is considered an early risk factor for the development of colon cancer.

The biopsies at 28 days showed that those taking the ginger supplement had a significant decrease in colon inflammation.

The researchers, writing in the journal Cancer Prevention Research, suggest that ginger has potential as an anti-cancer agent and they noted that “Ginger also seemed to be tolerable and safe”. They called for further investigation in people at high risk for colon cancer.

Ginger root may prevent the inflammation that is an early sign of colon cancer.