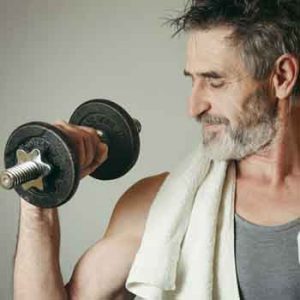 In men 8 weeks of supplementation with the Ayurvedic herb in combination with a resistance training program were associated with significantly lower levels of exercise-induced muscle damage, reductions in body fat and other benefits, compared with placebo.

The Indian researchers also report in the Journal of the International Society of Sports Nutrition that participants in the ashwagandha group also experienced significantly greater muscle size increases in the arms and the chest.

» Ashwagandha is a cornerstone Ayurvedic herb, known for its benefits in stress, cognitive function, sleep and metabolic wellness.

» A study in a group of younger men found that a standardised supplement of ashwagandha brought specific improvements during strength training including greater muscle strength and size.

» Future studies, say the researchers, should focus on other groups including women and older people to see if supplementing with the herb can also benefit them.

Ashwagandha has been gaining traction in the mainstream US market with consumers embracing its wide-ranging body of health benefits, which include supporting stress, cognitive function, sleep, metabolic wellness, adrenal function, sports performance and more.

According to a monograph from the American Herbal Pharmacopoeia (AHP), the herb has a history of use in Ayurvedic medicine that dates back as much as 4,000 years to the teaching of renowned scholar Punarvasu Atreya, and in subsequent works that make up the Ayurvedic tradition. The name of the herb derives from Sanskrit, and means “smells like a horse”, which refers to the strong smell of the root which is said to be redolent of horse sweat or urine.

The researchers recruited 57 young men to participate in their clinical trial. The men were aged between 18 and 50 and had limited experience in resistance training. They were randomly assigned to receive either placebo or supplements of ashwagandha root extract (600 mg per day, standardised KSM-66 brand ashwagandha) for eight weeks.

Participants in the ashwagandha root group displayed significantly greater increases in muscle strength on the bench-press exercise and the leg-extension exercise, they said.

In addition, testosterone levels were also significantly higher in the ashwagandha group, compared to the placebo group.

“This study confirms previous data regarding the adaptogenic properties of ashwagandha and suggests it might be a useful adjunct to strength training,” wrote the researchers.

Because the participants in the study were all relatively young and fit the researchers say that to fully understand ashwaganda’s potential as a training aid, future studies could usefully focus on other age groups and also on women.