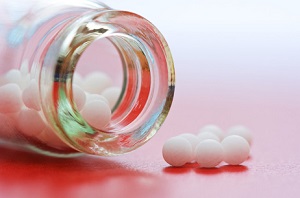 Natural Health News — A new study shows that for women suffering menopausal symptoms such as depression and hot flashes, a visit to the homoeopath may be the most effective course of action.

The study looked at symptoms in peri-menopausal and menopausal women. The peri-menopause is the period before menopause when menstrual cycles start to become irregular. A woman is only considered ‘menopausal’ when her periods have ceased completely for a year. Throughout both periods symptoms such as depression and hot flashes are common.

Writing in the medical journal PLoS One , the Mexican researchers compared the effect of individualised homoeopathic treatment with conventional fluoxetine (Prozac) treatment in 133 women with moderate to severe menopausal depression.

The women were given 6 weeks of either homeopathic treatment, fluoxetine or a placebo. At the end of that period the results showed that homeopathy and fluoxetine were both more effective than placebo BUT only homeopathy was more effective than placebo. In addition only homeopathy was effective for hot flashes. The research found that that individualized homeopathic treatment was so dramatically effective in treating the symptoms of menopause that the results were considered “clinically significant.”

This is not the first study to show that homoeopathic remedies can improve symptoms of depression.

Another trial from Brazil individualized homoeopathic treatment was found to be at least as effective as conventional fluoxetine.

In many countries the prescription of homoeopathic medicines is restricted to medically qualified doctors.  In these countries homoeopathy is often taught as part of core medical training and is integrated into a doctor’s general practice.  In France, for example, 40% of doctors prescribe homoeopathy and over 80% of the population has used homeopathy. As a consequence, research teams in France along with other pro-homeopathy countries such as Mexico (where the current study came from), Germany, and Switzerland, lead the way in today’s most exciting clinical research on homeopathy.

Conventional treatment with either hormone replacement (HRT) or mood altering drugs can have unwanted adverse effects. HRT  brings uncomfortable symptoms like bloating, nausea and breast tenderness but also more serious risks including thromboembolic disease (VTE and pulmonary embolism), stroke, cardiovascular disease, breast and endometrial cancer, and gallbladder disease and, because any reduction in symptoms often reappears when treatment stops, it has been argued provides no overall quality of life benefits.

Prozac can produce symptoms like hives, joint pain, dry mouth, restlessness, mood changes, and in rare cases heart, liver and lung problems. It is also associated with a higher risk of suicide and is not suitable for use in pregnancy

As a result many women are seeking a more natural, holistic way of dealing with the changes as no single conventional treatment appears to resolve all of the problems. Because homoeopathic diagnosis looks at the totality of a person’s life and symptoms before prescribing a treatment it may be better able to address the discomforts of menopause.