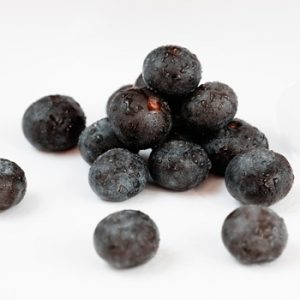 Açai, the small palm fruit from the Brazilian amazon, is very rich in nutrients and antioxidants. [Photo: Bigstock]

Natural Health News — The polyphenols found in açai can survive the digestive profess intact, potentially bringing prebiotic benefits throughout the gastrointestinal tract down to the colon, according to researchers in the UK.

The açaí palm is a species of palm tree cultivated for its fruit and hearts of palm. There’s growing interest in the health benefits of açai, which is sometimes called an Amazonian ‘superfruit.’ Scientists from the University of Reading and University of Roehampton suggest that its rich anthocyanin content means the fruit could help reduce the risk of age related diseases.

“We hypothesize that both fibre and plant polyphenols present in açai​ (Euterpe oleracea​) provide prebiotic and anti-genotoxic benefits in the colon,”​ they wrote in their report, published​​ in the journal Food Chemistry​.

» UK researchers have found that the antioxidant polyphenols in the açaí palm fruit may function as a prebiotic in the colon.

» Laboratory analysis showed that a high percentage of the antioxidants in the fruit pulp survive the digestive process intact making them available as a food source for good bacteria in the gut.

» It is likely that other high antioxidant foods serve a similar function.

This means that açai may have a prebiotic effect — which means it acts as food for beneficial bacteria living in the digestive system. Fermentation that comes from the bacteria’s digestion of prebiotics in turn provide health benefits to its hosts, such as anti-inflammatory activities, as well as influencing metabolism and satiety.

Genotoxicity, on the other hand, describes a substance that damages the genetic information within a cell causing mutations.

It is widely believed that antioxidants, such as polyphenols, can help protect against genotoxic stress, which has a role to play in aging and age-related diseases such as diabetes, Parkinson’s and Alzheimer’s disease.

In this laboratory study the scientists traced the journey of polyphenols through the digestive process, to see if and how well they survived to reach the colon intact.

The researchers used açai pulp that had been freeze-dried and ground to a powder. Then, they simulated intestinal digestion using a standardised method that mimics the human digestive system. This was done to “look at the potential bioavailability and bioactivity of açai polyphenols,” they wrote.

From the process, they found that 49.8% of the total initial polyphenols were available post digestion. “Our work demonstrates that polyphenols present in açai may be degraded during the digestion process, but importantly, that they are not fully destroyed and a significant percentage of these compounds may therefore reach the colon,”​ according to the report.

Reaching the colon intact means they become a useful food source for good bacteria there.

Multiple studies have emerged in recent years to study how anthocyanin-rich fruits interact with bacteria in the gut, and whether or not this interaction offers health benefits.

For instance, a systematic review​​ by Brazilian researchers recently shed more light on the prebiotic properties of anthocyanins. It also found that this type of antioxidant does actually feed beneficial bacteria in the gut, offering potential health benefits to the host.

Açai, the small palm fruit from the Brazilian amazon, is very rich in nutrients and antioxidants. [Photo: Bigstock]