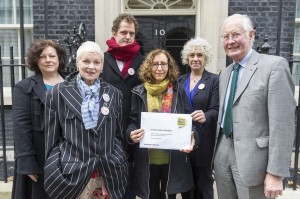 By now everyone has read THAT comment. The one where Dame Vivienne Westwood apparently suggested that if people couldn’t afford organic they should “eat less”.

Maybe you were outraged. But I can guarantee you weren’t there to see and hear what really happened. I was.

Dame Vivienne was part of a delegation which took a Letter from America on the dangers of GMOs to 10 Downing St – the UK Prime Minister’s residence.  The letter, a project of the group Beyond GM, was signed by individuals and groups representing some 57 million US citizens and was a plea to learn from America’s mistakes and not to go down the route of planting GMO crops in the UK and the rest of Europe.

It was signed by celebrities such as Susan Sarandon, Daryl Hannah, Frances Fisher, by activists like Robert Kennedy Jr, by the renown environmentalist Wendell Berry, by big environmental NGOs like the Sierra Club and Friends of the Earth, by consumer groups like the Organic Consumers Association, by progressive groups like MoveOn, Care2 and Corporate Responsibility International, by health groups like the Physicians for Social Responsibility and Healthcare Without Harm, by organic businesses like NYR Organic and Nutiva, and many, many more.

I have to declare an interest here. I am one of the founders of Beyond GM and I was part of the delegation that took the letter to Downing St. So I watched the whole excruciating thing unfold.

Here’s what happened: A reporter from Radio 5 Live turned up at Downing St, uninvited, unannounced and – worse, in my journalistic opinion – uninformed and unprepared. From where I stood, his only goal seemed to be to get the most outrageous quote from Dame Vivienne, known for her outspoken nature, that he could.

He was not interested in the Letter, or the issues behind it, and did not seem, even, to have read it.

When his intentions appeared all too clear, I jumped in asking him to speak to the rest of us for context and to learn about the actual content of the letter. This he did, grudgingly. But these comments never made it into print or onto the Radio 5 Live show from which the print articles were drawn.

When I asked how the recordings would be used, he said they would be played in the studio and that likely Radio 5 Live would invite someone from the ‘other side’ into the studio to comment on what was said “for balance”.

True to his word, Radio 5 Live did not invite Beyond GM to come onto their programme to discuss our project – or Dame Vivienne’s comments. Instead it invited a representative from an unrelated group to speak about the events – which she did not witness. Other radio programmes also invited representatives from other unrelated groups to ‘defend’ Dame Vivienne’s comments.

This is modern journalism at its least professional and it was astonishing how many people jumped on the social media and national media bandwagon of criticism without ever wondering how such comments arose and whether Dame Viv might even have been goaded – just that little bit – into making them.

For what it’s worth, it seemed quite clear to those of us there that she was talking about the money we waste on junk food and unhealthy diets and how this could be better spent on less but better quality food. A fair point in any context and one for which there is good evidence.

In addition to eating less of the wrong foods, we should as celebrity chef Valentine Warner rightly pointed out on the day, be wasting less too. With those bookends in place more of us could afford to eat better quality food and benefit from its superior nutrition.

Fortunately, you can’t keep a good campaign down.

The Letter from America went live that day; it was featured in, amongst others, the Daily Mail, the Guardian and the Express. The Times carried a full page ad for it. Hundreds of thousands of commuters at London Waterloo – Europe’s busiest railway station – saw the amazing digital billboard. The BBC World Service broadcast it to millions. Our partners in the US sent it out to their millions of members and followers too. The Australian media even picked it up.

On publication it was opened up to all US citizens to sign and in the last week groups and individuals representing another 10,000 plus citizens have signed on.

In the UK every MP received a copy of the letter from us. Our invitation to UK citizens to write to their MPs about it has already resulted in around 100 letters – that we know of – sent to MPs around the country from our website. The number grows every day in this lively new people’s campaign.

Misdirection away from GM issues is a tired old media trick. It is used to get people angry about frivolous things so they don’t engage with what really matters in life.

If you want to get mad, some things to get mad about include sloppy journalism, bad radio programmes, trivial ‘news’ stories, the UK government’s willingness to ignore public opinion and its unscientific pro-GM stance.  You can help do something about the last two, before it’s too late, by joining in the GM Free Me campaign the UK, or by sending the Letter from America to your MP.

The more of us who join in, the more dumb journalists will be forced to cover the issues instead of manufacturing them.