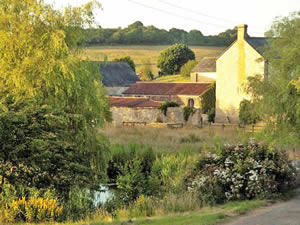 January and February have been a chance for us to take some time off, which coincides with most of our restaurant customers closing.

It is always a good time of year to learn new skills, and this year I worked with my brother Jack for a few days. He was making a porch for a blacksmith, in return for some metalware. The trees had been felled by the time I got to the woods, and Jack had already hewn them into remarkably polished, square timbers using only axes. He had also made a trestle.

We then went about lifting the lengths of tree up onto the trestle using a block and tackle from the 1800’s. Once the timber was rested on the trestle with more than half of it overhanging the end, it was secured with a chain around the trestle and a wedge. Jack then climbed the trestle and I lifted him the top end of the pit saw and we became sawyers for a few days.

The purpose of the three days was to process the trees into timbers for the construction of the porch. We managed to cut a considerable amount of wood and converted the trees into almost ten times their raw value in a relatively short time. In fact, we worked out that by processing the timber this way rather than buying it from a conventional sawmill we could have paid ourselves the equivalent of £90 per day each (if he wasn’t doing it as an exchange!).

The value of manual skills in a technological age

The point of this is that all too often people make ill informed assumptions that using traditional manual techniques such as this is no longer viable. However, often land-based workers are used to working hard for a small salary and if techniques like this were used more often, traditional skills would be maintained. People would also perhaps enjoy the processes of producing something as a whole, which gives a real understanding and meaning to everything, rather than being just a detached part of a larger process.

This can also be seen in modern, large scale farming techniques, which are based on machinery doing most of the work and the soil simply being a substrate in which plants grow. Farmers then become disconnected from the plants and the soil and understand less and less the needs of plants and the need to look after the soil. It is this separation from the land that has led to a gradual decline in understanding of how it should be managed, and as more and more farms merge into fewer, larger farms employing fewer people this problem becomes greater.

In the last 6 years or so a staggering 25% of all farms in the EU have closed, as larger farms consume them. This is leading to a loss of knowledge and skills and farming methods that rely on fossil fuels and chemicals. What better way to tackle the impending issue of food production along with the increasing unemployment rates in the UK than to encourage more small scale food production. It is after all smallholders who produce around 70% of the world’s food.

Preparing the ground for spring

Back to the farm, after having a quiet January and beginning February we are just beginning to get back into the groove of preparing for the year ahead. Seed sowing is a fine example of connecting us as humans to plants and the soil and to give a real understanding of vegetable growing, and this will begin by the middle of the month. Tomatoes, peppers, aubergines, lettuce, spring onions and the like will be sown into trays in the propagating tunnel to be potted on and planted out later in the spring.

The salad has just started putting on a fair amount of growth and we are picking it along with the chervil and coriander from the tunnels. Not much else will be ready for some time. All of the brassicas really suffered in a wet part of the garden and every time I look at the purple sprouting more of the leaves are yellowing and the plants are looking more sickly.

We have just bought another tunnel to try and keep the rain from a few more of our crops, so hope to get this up and ready for planting before it gets too busy in the spring. We hope to extend the season a little bit at both ends of the year so that we have more space to grow crops earlier in the year such as spring onions, beetroot and spinach as well as growing more crops later in the autumn. Due to the heavy clay soil in the garden it can be difficult to prepare the soil early for crops, so providing covered space allows for controlled irrigation meaning we can plant earlier in the year.

The garden is wet and there is not very much growing, fortunately in the tunnel there are plenty of Winter salad leaves and a wonderful crop of coriander. Coriander combines well with ginger and chillies providing a cool, pungent foil to the hot spices.

Blend the garlic, chilli, salt and  lemon together either in a food processor or a pestle & mortar, add half the olive oil and half the coriander, work to a smooth paste. Add the pine nuts remaining coriander and oil and blend keeping some texture

Combine all the ingredients, except the coriander and yoghurt,  together and pound  in a pestle and mortar to make a paste. Stir in the yoghurt and coriander.

Cook the onion, ginger and garlic in the olive oil for 1 minute, add the carrots tossing well.  Cover & cook gently until they begin to soften.  Add the cinnamon, cardamom, salt and black pepper and mix well.  Toss in the chopped coriander and serve.