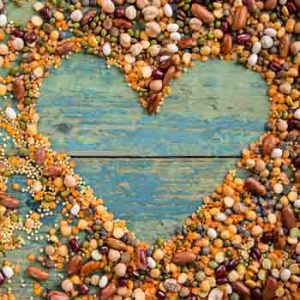 Pulses support human health and the health of the planet. [Photo: Bigstock]

Green beans: why pulses are the eco-friendly option for feeding – and saving – the world

We all know the score.

Current trends predict there will be 9.7 billion mouths to feed by 2050. Producing enough food without using more land, exacerbating climate change or putting more pressure on water, soil and energy reserves will be challenging.

In the past, food security researchers have focused on production with less attention paid to consumer demand and how food is ultimately used in meals. However as developing nations aspire towards the “Western diet”, demand for meat and animal products is rapidly climbing.

This is bad news for the planet. Meat is a luxury item and comes at a huge environmental cost. Shuttling crops through animals to make protein is highly inefficient: in US beef, just 5% of the original protein survives the journey from animal feed to meat on the plate. Even milk, which has the best conversion efficiency, has just 40% of the original protein.

» Meat is an environmentally damaging source of protein – and it has become clear that we can’t maintain or even grow our current global consumption habits without causing lasting harm to the planet.

» Pulses are a good source of vegetable-based protein but are largely ignored in the West where they are grown mostly as a cheap source of animal feed.

» Getting more pulses into the diet either directly or in the form of new pulse-based foods like pasta can help us meet our protein requirements with a food that actually helps support a human health and a healthy environment.

Consequently, livestock farming requires huge amounts of water and land for grazing and feed production, taking up an estimated 70% of all agricultural land and 27% of the human water footprint. Much of this land is becoming steadily degraded through overgrazing and erosion, prompting farmers to expand into new areas; 70% of cleared forest in the Amazon, for instance, is now pastureland. Livestock production is also one of the greatest contributors to greenhouse gas emissions, including 65% of man-made nitrous oxide emissions (which have a global warming potential 296 times greater than CO₂).

Nevertheless, millions of people in developing countries still suffer from protein malnutrition. The burden, therefore, must fall on people in richer nations to reduce their meat consumption and embrace other sources of protein.

Pulses are a healthy alternative

Enter the pulses: beans, peas and lentils. Although generally cheaper than meat, these are rich sources of protein and also come with essential micronutrients including iron, zinc, magnesium and folate. As low GI (glycaemic index) foods, they release their energy slowly over time, preventing surges in blood glucose. Naturally gluten-free, they are also ideal for the rising numbers of those with coeliac disease.

Besides being rich in goodness, pulses are also low in many undesirables including cholesterol, fat and sodium, which all contribute to heart and blood issues. In fact, pulses seem to actively protect against these maladies. Numerous studies confirm legume-rich diets can decrease cholesterol levels and when 50g of lentils were added to the diet of diabetic patients, their fasting blood sugar levels significantly decreased.

Meanwhile, populations with the greatest lentil consumption also have the lowest rates of breast, prostate and colorectal cancer. This may be partly due to the high fibre content of pulses: increasingly, a high-fibre diet is associated with a reduced risk of colorectal cancer. Fibre content may also explain the satiating effect of pulses: for example, incorporating lentils into energy-equivalent meals causes greater fullness and leads to a lower calorie consumption later in the day.

Just as they are good for us, beans, lentils and peas are also good for the environment. As they work with bacteria that convert atmospheric nitrogen into useful ammonia or nitrates, legumes actually improve soil fertility and reduce dependence on energy-intensive fertilisers.

Despite all this, the potential of pulses is largely unrecognised. Currently demand is dominated by India and Pakistan, however poor yields mean the two countries import more than 20% of global pulse production. Even big exporters like Australia and Canada remain inefficient, achieving barely half the yield per acre found in Croatia. This “yield gap” exists because these countries typically grow pulses as animal feed or to break up crop rotations. Optimising pulse harvests in both developing and developed nations could thus be an easy way to boost global protein production.

Nevertheless, pulses face traditional barriers in the West, including the need for overnight soaking, unappealing tastes and potential flatulence from a high-fibre diet. To overcome these, ingredient manufacturers have developed pulses into new functional ingredients that provide all the benefits of eating whole pulses. These already include pasta, crackers, batters, flours and egg/meat-replacement products.

Even so, we should all consider how much meat we really need. A more plant-based diet is a winning strategy for our wallets, our health and the environment.

Pulses support human health and the health of the planet. [Photo: Bigstock]