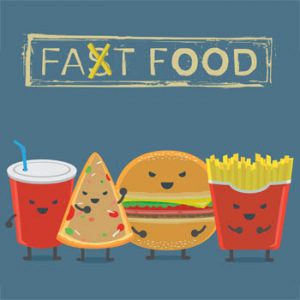 Your body reacts to a diet of junk foods in the same way it reacts to an acute infection. [Image: Bigstock]

How junk food puts your immune system on high alert

The immune system reacts in a similar way to a high fat, high calorie Western diet as it does to a bacterial infection.

It sounds incredible and yet this was the finding of a recent study led German researchers at the University of Bonn.

Particularly disturbing was the finding that unhealthy food seems to make the body’s defences more aggressive over the long term. Even long after switching to a healthy diet, inflammation that stimulated an innate immune response was more pronounced.

These long-term changes may be involved in the development of arteriosclerosis and diabetes, diseases linked to Western diet consumption, say the research team.

For their study the scientists placed mice on a so-called “Western diet” – high in fat, high in sugar, and low in fibre – for a month. The animals consequently developed a strong inflammatory response throughout their bodies, similar to after an infection with dangerous bacteria.

To better understand what was going on beneath the surface, the scientists looked at the activity of immune cells in bone marrow samples taken from mice on a Western diet and mice on a healthy diet.

» German scientists have shown that a typically high fat, high calorie diet triggers the immune system in much the same way as an infection.

» Using an animal model they found that even a short time on a Western diet triggered systemic inflammation and this in turn prompted the body to produce more immune cells, essentially putting the body on high alert, ready to respond to a new attack.

» Even after returning the animals to a healthy diet, the immune system did not reset itself.

» In this high alert state the immune system reacts even to small stimuli with stronger inflammatory responses that can accelerate the development of vascular diseases or type-2 diabetes.

What they found was that the Western diet caused the immune cells to proliferate faster. Essentially this means that a fast food diet quickly mobilises a large and powerful army as it would with an acute infection. And although the inflammation disappeared after 4 weeks back on a healthy diet, the high level of immune response remained switched on.

“It has only recently been discovered that the innate immune system has a form of memory,” explained Prof Dr Eicke Latz, Director of the Institute for Innate Immunity of the University of Bonn. “After an infection, the body’s defences remain in a kind of alarm state, so that they can respond more quickly to a new attack.” Experts call this “innate immune training.”

In this study, this process was not triggered by a bacterium, but by an unhealthy diet and the damage done, say the scientists, goes right to the molecular level and has long-term consequences for health.

This is because activation by Western diet changes the way in which the genetic information is packaged. The genetic material is stored in the DNA and each cell contains several DNA strands, which are typically wrapped around certain proteins in the nucleus. This means that many genes in the DNA cannot be read as they are simply too inaccessible.

Unhealthy eating causes some of these normally hidden pieces of DNA to unwind, similar to a loop hanging out of a ball of wool. This area of the genetic material can then be read much easier as long as this temporary unwrapping remains active. Scientists call these phenomena epigenetic changes, noting that when this happens the immune system reacts even to small stimuli with stronger inflammatory responses.

These inflammatory responses can in turn accelerate the development of vascular diseases or type-2 diabetes. In arteriosclerosis for example, the typical vascular deposits, the plaques, consist largely of lipids and immune cells. The inflammatory reaction contributes directly to their growth, because newly activated immune cells constantly migrate into the altered vessel walls. When the plaques grow too large, they can burst, leading to blood clotting and are carried away by the bloodstream and can clog vessels. Possible consequences: Stroke or heart attack.

What is clear is that poor nutrition can have dramatic consequences. In recent centuries, average life expectancy has steadily increased in Western countries. But this trend is slowly reversing and for the first time in a long time individuals born today will live on average shorter lives than their parents. Unhealthy diets and too little exercise likely play a decisive role in this.

“These findings therefore have important societal relevance,” explains Latz. “The foundations of a healthy diet need to become a much more prominent part of education than they are at present. Only in this way can we immunize children at an early stage against the temptations of the food industry. Children have a choice of what they eat every day. We should enable them to make conscious decisions regarding their dietary habits.”

Your body reacts to a diet of junk foods in the same way it reacts to an acute infection. [Image: Bigstock]