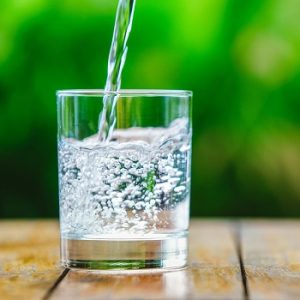 Water is essential to healthy living - but what is the 'best' water? [Photo: Bigstock]

Is there such a thing as ‘better’ water?

Water is an essential life-giving nutrient, but all too often it’s assumed that there is no meaningful variation in water quality from one glass to the next. This couldn’t be further from the truth.

In fact, there can be a significant difference between two glasses of plain still water. Questions of chlorination, fluoridation, filtration, microplastic content, the presence of bacteria and drug residues, and water pH all come to mind.

Upping your water intake is typically a good idea, but what if instead of drinking more water, you prioritised drinking better water?

On the surface British tap water has a stellar reputation, passing more than 99.9% of quality tests according to Water UK’s senior policy advisor Dr. Jim Marshall.

However, look hard enough and you can find plenty of negative press. Did you know, for instance, that traces of cocaine have been found in UK drinking water?  It’s not the only drug to be detected; the same 2014 survey found traces of painkillers and epilepsy medication, while earlier surveys have also found traces of cancer and psychiatric drugs.

» Water is essential to all life, but not all water is created equal.

» Increasingly surveys of tap water are showing the presence of pharmaceuticals and bacteria, both ‘good’ and ‘bad’ though many water authorities don’t test for either.

» But the structure of our water – for instance its mineral content or how much hydrogen it has in it – can also be influential when choosing the ‘best’ water.

The problem is mirrored in the United States. In February 2017, research published in the journal Science of the Total Environment identified a staggering 118 pharmaceuticals in drinking water samples taken from 25 U.S treatment plants.

Although the report pointed out that treatment processes were effective at reducing concentrations of “most pharmaceuticals,” it conceded that pharmaceuticals “more consistently persisting through treatment include carbamazepine, bupropion, cotinine, metoprolol and lithium.”

Of course, we are advised not to worry because the levels are considered too low to pose a direct risk to health. But can anyone honestly say that the potential effects of ingesting these and other contaminants over the course of one’s life is properly understood?

In truth, pharmaceuticals are only part of the problem. Pesticide and herbicide residues have also been detected, though drinking water “must not have more than 0.5µg/l of pesticides in total” according to the UK Drinking Water Directive.

Furthermore, the scale of microplastic contamination was widely reported in the media earlier this year. 83% of tap water samples collected on five continents tested positive for plastic fibres, and 72% of water tested in Europe was shown to be contaminated.

The average 500ml European sample contained 1.9 microscopic fibres of over 2.5 microns, or about the width of a human hair.

Given that plastic is composed of major toxic compounds known to cause illness, any claim that unwittingly drinking microplastics is no cause for concern should be treated with the scorn it deserves.

Indeed, a 2017 report published in the peer-reviewed journal Environmental Science & Technology sounded a more cautious note, concluding that “chronic exposure (to microplastics) is anticipated to be of greater concern due to the accumulative effect that could occur.”

In addition, water fluoridation remains a thorny issue. 11% of the UK population still receive artificially fluoridated tap water, and opinion is so divided about the benefits or potential adverse health effects, that no new fluoridation schemes have been approved in this country for over two decades.

The fact that you can find many people who either praise fluoride or condemn it as a harmful neurotoxin speaks to our earlier point: that there is a perceptible variation between different types of available (i.e. post-treatment) drinking water.

For what it is worth, we believe European nations were correct to reject mass water fluoridation and we recommend using a filter to remove it if you live in a fluoridated area.

Pathogens are another cause for concern. While intriguing research from Sweden in 2015 has shown that our drinking water is to some extent purified by millions of “good bacteria” present in it, other research shows that drinking water can also be contaminated with pathogenic bacteria such as E. coli (Escherichia coli) and Enterococci.

United Utilities, Britain’s biggest listed water company, have admitted “it is impractical to analyse drinking water directly for the wide range of pathogens that could be present.”

All considered, there are a number of valid reasons why one could be reticent about drinking tap water; or why one might investigate ‘better’ water options.

There is much active investigation and research taking place into the healing energies of water. One of the key figures in this area is Dr. Gerald Pollack, whose work demonstrates that water within living systems exists not, as we know it, as H2O but as structured matrices made up of H3O2 molecules (known as ‘EZ water’).

Dr. Pollock’s groundbreaking book The Fourth Phase of Water is essential reading for anyone interested in the subject, but in the meantime the Alliance for Natural Health have put together an informative article delving into the science of this kind of structured water. Dr. Pollack’s TEDx talk is also embedded in the article or can be accessed via the TEDx YouTube channel.

Other forms of water some consider preferable to traditional tap water include alkaline water, hydrogen-rich water, filtered or reverse osmosis water, distilled water, vortex water or plain old bottled mineral water. Issues of purity are generally central to a person’s decision to deviate from the tap water route, though taste and cost also come into the equation.

For some, the most important thing to consider is the potential health benefits derived from your chosen form of hydration. On that point, hydrogen-rich water – the sort which contains dissolved hydrogen gas – appears to be a major advance.

According to work done at the Molecular Hydrogen Institute, which collaborates with universities and institutions worldwide to advance the clinical research of H2, there are over 1,000 scientific articles suggesting molecular hydrogen has therapeutic potential in over 170 different human and animal disease models.

It is our view that water should be properly structured, contain beneficial minerals, have an alkaline pH, and be free, as far as possible, from contaminants. Several of our systems also stimulate the release of coveted molecular hydrogen, which we consider to be a major scientific breakthrough.

The benefits of hydrogen-enriched water have only recently attracted mainstream attention in beauty magazines like Elle, although it’s been popular in the Far East – particularly Japan – since the ‘60s.

Whatever water you choose to drink, don’t ever accept that water is good merely for filling the space between cells; or that all water is equal. Believe that and you really are wet behind the ears.

Water is essential to healthy living - but what is the 'best' water? [Photo: Bigstock]