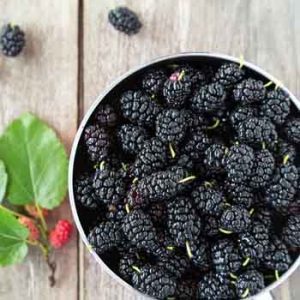 Mulberries are rich in antioxidants and tea made from the leaves can help manage blood sugar levels. [Photo: Bigstock]

The health benefits of mulberries

Mulberries are an ancient fruit with a long tradition of use as a medicine.

There was a time when they were highly regarded, even amongst western doctors, as a tonic for the whole body –and were reputed to help fend off the signs of ageing such as grey hair.

All parts of the plant from root to tip can be used medicinally, though these days we tend to concentrate only on the fruit and leaves, which are high in antioxidant anthocyanins as well as cancer-fighting resveratrol and vitamin C.

Although there are many different types of mulberries, there are three main species that you will see in health stores and supermarkets:

The leaves of the mulberry tree are also traditionally used to strengthen the liver and lungs, treat fevers and cold and eye infections. They also have important antidiabetic properties which modern science is beginning to acknowledge.

Mulberry leaf tea’s health benefits are attributed to its naturally occurring compound, 1-deoxynojirimycin, or DNJ, which is responsible for its antidiabetic effects. Like the fruit, the leaves also have powerful antioxidant properties and has been found to lower cholesterol and triglycerides and reduce inflammation.

The mulberry fruit, which looks similar to a blackberry or a loganberry, is rich in plant compounds, such as anthocyanins, which contribute to both its colour and health benefits.

The most abundant nutrients and other compounds in mulberries are:

This powerhouse of nutrients is likely why mulberries or mulberry leaf extracts have been shown to be beneficial against several chronic diseases, such as heart disease, diabetes, and cancer. Here’s some specifics:

Cholesterol is an important fatty molecule found in every cell in the body. However, elevated cholesterol in the blood is also linked to increased risk of heart disease. This is because as the body tries to metabolise the cholesterol, free radicals are formed and these in turn become the plaques that clog arteries. The anthocyanins in mulberry fruit have been shown to may inhibit oxidation of LDL cholesterol.

There is evidence from animal studies that an infusion made from the leaves can reduce excess fat and lower cholesterol levels as well as improving the ratio between LDL (‘bad’) and HDL (‘good’) cholesterol. In a study where researchers gave people participants 12 milligrams of mulberry leaf extract three times daily for three months they found that cholesterol levels were lowered significantly.

Laboratory studies suggest that both the anthocyanins in the fruit and an infusion of the leaves  can reduce the formation of fat in the liver, potentially helping to prevent fatty liver disease.

Diabetics are sensitive to rapid changes in blood sugar, and need to be careful of the amount and type of carbohydrates in their diets.

Mulberries have been shown to help normalise blood sugar levels in diabetics. Studies have also shown that a fruit extract in the form of an alcohol-based tincture has antidiabetic and antioxidant activities  while an extract from the bark and branches of the tree was found, in an animal study, to effectively inhibit the postprandial hyperglycaemia (a steep rise in blood sugar after meals).

It is the leaves, however that show the most potential for treating diabetes. There are both human and animal studies (albeit small ones) to support this. Animal studies have shown that mulberry extract can reduced blood glucose in normal rats and rats with diabetes.

In humans it has been shown to reduce fasting and non-fasting blood glucose concentrations in subjects with type-2 diabetes, and even out fluctuations in blood glucose levels in both healthy and diabetic people.

In a small 2007 study mulberry leaf extract was compared to placebo. Results showed that the mulberry significantly curbed glucose spikes in the first two hours after consumption of a sugar drink. The scientists concluded that mulberry could be useful both in the treatment of diabetes and in its prevention.

Mulberries may also have a small role to play in preventing cancer.

Increased stress in the body has been shown to induce oxidative damage in cells and tissues, and is associated with increased risk of cancer. Animal studies indicate that antioxidants in mulberry juice can decrease oxidative stress, potentially reducing the risk of cancer.

Many antioxidants exert an anti-inflammatory effect as well. Mulberry leaf has been traditionally used to treat inflammation caused by chronic diseases, and a 2013 laboratory study supports this use.  It found that mulberry leaf inhibits inflammatory agents in the body, cutting off the body’s inflammatory response.

This effect has also been seen in animal studies and suggests that mulberry leaf tea could be used to help ease pain by reducing inflammation.

Mulberries are very fragile and the fresh fruits don’t store well. This is why we generally see them in stores as dried fruits. Dried mulberries have a more intense flavour than the fresh berry which can be a bit bland; they make a great substitute if you are bored with raisins!

Mulberries are high in pectin and you can make a good jam from the dried fruits. You can also add dried mulberries to regular or green tea, as well as to porridge to give a pleasant sweetness and add nutrition.

Mulberries are rich in antioxidants and tea made from the leaves can help manage blood sugar levels. [Photo: Bigstock]