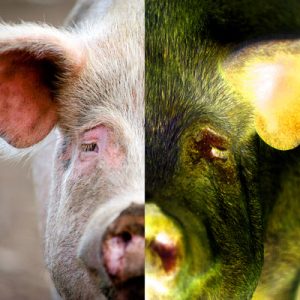 Two new reports paint a startling picture of the biotech industry's vision of the future of food [Photo: Bigstock]

Brave new world: what you need to know about gene-edited farm animals

For decades, the biotech industry has spun a narrative around genetically engineered crops that could be summed up very simply as “jam tomorrow, instead of bread and butter today.”

Sustained—and financed—largely on the promise of spectacular success at some unidentified point in the future, the research and development of new types of GMO foods, made with a whole host of new genetic engineering technologies, has gathered pace in recent years.

These days, without most people being aware of it, genetic engineering is spreading from the crops in the field to the animals in the barn.

Using new genome editing (sometimes referred to as “gene editing”) techniques like CRISPR, biotech breeders are proposing to breed a brave new world of farm animals that don’t get sick, don’t feel pain and produce more meat, milk and eggs at a lower cost than ever before.

Not many NGOs are currently working on this issue and it can be hard to find good information to help make sense of it all. But two recent reports provide in-depth information on the mechanics as well as the ethical issues around gene-edited farm animals.

One, from Friends of the Earth, entitled “Genetically Engineered Animals: From Lab to Factory Farm,” is an extensively referenced report that provides key background information and highlights the urgent need for safety assessments of genome-edited animals.

The other, “Gene-edited Animals in Agriculture,” is a report from a day-long roundtable in June 2019, co-hosted by my organization, Beyond GM, and Compassion in World Farming in the UK. The roundtable involved individuals representing a wide range of perspectives. What emerged was a fascinating glimpse into not only the technology, but also the ethics and values systems that underpin that technology.

If you are new to the subject of genetically engineering farm animals for food, if it concerns you or if you just want to know more in order to be an informed consumer, these two reports provide an important starting point.

What are gene-edited animals?

Gene editing is a type of genetic engineering. It is used as an umbrella term for a suite of new technologies, of which CRISPR is the most well-known.

How is gene editing being used on farm animals?

Much of the current research and development is focused on health problems in farm animals raised in intensive, industrial systems. Genome editing has been proposed as a way to protect animals from disease by altering their immune response to diseases like PRRS (Porcine Reproductive and Respiratory Syndrome) and ASFv (African Swine Fever) in pigs and ISA (Infectious Salmon Anemia, or “salmon flu”) in farmed salmon.

Researchers are also looking at creating animals with desirable commercial attributes, such as the ability to produce more muscle mass (meat) while consuming less feed.

They are also looking for ways to adapt animals to their environments, such as cattle with “slick” coats that protect them from extreme heat.

These problems targeted by the biotech industry are real. But most of them are also manmade—a consequence of the crowded factory farm conditions in which the animals are raised, and the spread of industrial livestock operations into geographical areas (e.g. tropical climates) not well suited to this kind of farming.

Poor health in animals often arises as a result of the systems in which they are kept. Gene editing should not be used to address diseases that primarily arise from keeping animals in stressful, crowded conditions. Such diseases can, and should be tackled by improving things like housing and hygiene, and lowering stocking densities, before turning to selective breeding – of any kind.

What advantages are claimed for gene-edited farm animals?

Genome editing has been proposed as a solution for sustainably feeding a growing world population. Producing animals that grow faster and eat less, argues the biotech industry, reduces input costs for the farmer and, on a global scale, helps reduce the amount of crops diverted to livestock as feed, and may also help to reduce the impact of industrial meat production on global warming.

Gene-editing could be used to control reproduction, for instance to produce more female dairy cows (thus more milk) or more female chickens (more eggs). “Gender skewing” in this way, say biotechnologists, has the added bonus of lowering the number of male cows and chickens culled shortly after birth.

There are also claims that genome editing could be used to “edit out” animals’ ability to feel pain and stress. This, it is argued, would reduce the animals’ suffering in factory farm conditions. Opponents argue, however that this is unethical, reduces the animals to little more than a machine and furthers the interests of those who support factory farming.

Another major argument for gene editing is that it can speed up the breeding process—producing in 2 years an animal that might take 10-15 years via traditional breeding.

This notion of speed, however, may be misleading. Although genome editing is promoted as a fast technology with limitless possibilities, no gene-edited animals have yet made it into farms or the food chain.

Most of the “innovations” you read about in the media are based on studies performed to show what might be theoretically, technically possible. These PR stories are often released by research institutions as a way of attracting the interest of funders that might be interested in financing further work.

But if gene editing can help relieve animals’ suffering, isn’t that a good thing?

Most researchers involved in this work (as opposed to the large biotech companies that eventually market the finished product) are concerned for animal welfare and believe that what they are doing will help animals.

It is worth remembering that those involved in conventional selective breeding believe that they, too, are doing “good.”

However, decades of evidence show that selective breeding for specific traits can have a negative impact on animal health, including skeletal and metabolic diseases, lameness, reproductive issues and mastitis.

The fact is, the more we breed animals to be little more than “production units” in industrial farms, the less likely it is to benefit the animal—whatever the method.

How successful have attempts at gene editing been so far?

Results in animals thus far are not as predictable or reliable as researchers had hoped.

Brazil’s plans to breed hornless dairy cattle, gene-edited with TALENs were recently abandoned when a study by the U.S. Food and Drug Administration (FDA) revealed that one of the experimental animals contained a sequence of bacterial DNA that included a gene-conferring antibiotic resistance. In theory, this antibiotic-resistance gene could be taken up by any of the billions of bacteria present in a cow’s gut or body—and from there be spread beyond the farm.

Other recent research has shown that edited mouse genomes can acquire bovine or goat DNA. This was traced to the standard culture medium for mouse cells, which contains DNA from whichever animal species it may have been extracted from. This mix-and-match DNA is potentially a problem for other genome-edited animals, too. And it raises some urgent questions about authenticity and traceability.

Studies like these, which are appearing with ever-greater frequency, suggest that the science of genome editing in animals is a long way from providing watertight solutions to the problems associated with factory-farmed animals.

Are there any gene-edited animals on the market now?

Although it is promoted as a fast technology with limitless possibilities, genome-edited animals have yet to appear on farms or in the food chain.

The only genetically engineered animals currently on the market is the GMO salmon on sale in Canada and the U.S. This was produced using older style genetic engineering.

Can we achieve the same improvements in farm animals with traditional breeding?

Conventional breeding can also produce robust animals that are suited to their geographical locations. Both farmers and consumers are showing increasing interest in these kinds of “heritage breeds.” And supporting them also helps to protect the diversity of the animal gene pool.

Conventional breeding also has the advantage of not requiring complex regulation. The U.S. Department of Agriculture is currently trying to “simplify” things by proposing that it, rather than the FDA, should have oversight on genome-edited animals and that these animals should be exempt from regulation.

Given the scientific uncertainty around genetically engineered animals, this kind of blinkered rubber-stamping should alarm consumers.

Surely, gene editing is just another tool in the toolbox. Is it right to discount it entirely if one day it might be a useful tool?

Most people agree that our food system is no longer functioning optimally, that it needs to change and is, in fact, changing. Genetic engineers believe that they have something that can help agriculture change. They often refer to gene editing as a “tool in the toolbox.”

This suggests that rather than being a universal panacea, genome editing may be a technology with useful but limited applications and several caveats—i.e. you don’t use a wrench when you need a hammer.

Arguably, more important than the “tool” is the “toolbox” itself, which is what we use to frame our questions, the points of reference we use and how we organize our thoughts.

All over the world, the “toolbox” is the intensive, industrial farming model—these days referred to as “sustainable intensification.” This model drives much of the thinking and decision-making around agriculture and agricultural policy.

In a world where agroecology and regenerative farming are the dominant systems, decisions around genome editing, about when—or indeed if—it is needed might look very different.

There is now a large body of opinion suggesting that, whichever yardstick is used—welfare, sustainability, environment, nutrition—the industrial farming system is damaging and outdated.

If we envisage the future of farming where the industrial model will continue to dominate, then genome editing may take on a more prominent role.

However, if we envisage a future for farming as largely agroecological, and invest in and work conscientiously towards that kind of system change, then it is possible that gene editing won’t have a role to play.

In that future, instead of creating genetically engineered animals to fit into factory farms, we will develop sustainable and ecological animal agriculture systems that support animal welfare, preserve and restore biodiversity and protect public health.

Two new reports paint a startling picture of the biotech industry's vision of the future of food [Photo: Bigstock]