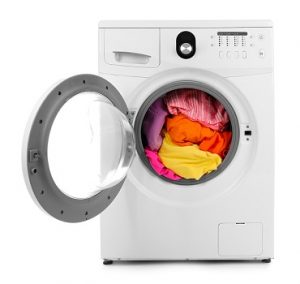 Polyester and acrylic clothing sheds hundreds of thousands of plastic fibres each time it is washed. {Photo: Bigstock]

You can hardly open a newspaper these days without seeing reports about the devastating state of our oceans, in particular from plastic pollution.

Microplastics contribute up to 30% of the ‘plastic soup’ polluting the world’s oceans. In developed countries they can be a bigger source of marine plastic pollution than plastic waste.

This form of pollution harms marine wildlife and accumulates in the human food web, with potentially negative consequences for health. The effects on fragile ecosystems, for instance the Arctic where microplastics could affect ice formation and melting, are still unknown.

For some time microbeads, tiny pieces of plastic that wash down the drain when we use products like cosmetic scrubs and whitening toothpastes, have bene the focus of everyone’s attention. But according to a recent IUCN report cosmetics only account for 2% of ‘primary microplastic pollution’ – plastics that enter the oceans as small particles, as opposed to larger plastic waste that degrades into small particles over time.

Between 15-31% of the estimated 9.5 million tonnes of plastic released into the oceans each year is primary microplastics. Almost 35% of this – by far the biggest share – comes from washing synthetic textiles.

» Cosmetic microbeads are an important source of ocean pollution – but new research is pointing to an even bigger problem.

» Clothes made from synthetic fibres shed up to 700,000 plastic particles with every wash and account for nearly 35% of the primary microplastic particle sin the sea.

» Fashion brands vary in their response to the problem, but it’s clear that new or different types of plastic clothing can only take us so far in terms of real solutions.

Commenting on the report IUCN Director General Inger Andersen noted that daily activities such as laundry: “significantly contribute to the pollution choking our oceans, with potentially disastrous effects on the rich diversity of life within them, and on human health. These findings indicate that we must look far beyond waste management if we are to address ocean pollution in its entirety.”

Joao de Sousa, Marine Project Manager, IUCN’s Global Marine Programme added that the results shows that “solutions must include product and infrastructure design as well as consumer behaviour. Synthetic clothes could be designed to shed fewer fibres, for example, and consumers can act by choosing natural fabrics over synthetic ones.”

Designing better textiles is certainly part of the solution, but one that is likely to take time when you consider how many articles of synthetic clothing there are in the world that need replacing (and what do we do with the old ones?) Another piece of the puzzle is better filtration systems for washing machines but also for water treatment plants. But this brings up the problem – having removed this pollution what do we then do with it?

As for asking people to change their attitude to fashion – that too appears to be a long, hard struggle.

Studies as far back as 2011 found that estimated 1,900 microfibres could get rinsed out of a single piece of synthetic clothing each time it’s washed.

At the time this seemed an incredible amount and researcher Mark Browne began contacting clothing manufacturers to alert them and ask if they’d help fund further research into the problem. Big brands like Patagonia, Polartec, Columbia, and others reportedly responded by saying that they didn’t think the fibres were anything they needed to worry about.

Browne is a former student of Richard Thompson, a senior lecturer and professor of marine biology at Plymouth University. Research by Thompson continues to inform this debate.

More and more sophisticated collection techniques employed by he and colleagues have shown that Browne’s early estimates of how much plastic is shed from laundry were likely a gross underestimate.

In a recent laboratory study they found that polyester and acrylic clothing sheds hundreds of thousands of plastic fibres each time it is washed. In fact, an average UK washing load of 6kg (13lb) released:

As research about the scale and risks of microplastics in the oceans has piled up – Patagonia took the plunge and financed its own small study, in conjunction with the University of California, Santa Barbara. This found that during laundering, a single Patagonia fleece jacket sheds as many as 250,000 synthetic fibres.

Or looked at another way, enough plastic bags to starve nearly 400 whales to death.

Thompson’s response was that, while interesting, the fibre shed in Patagonia’s study is an underestimate, in part because it did not wash the clothes in detergent. Surfactants present in laundry detergent significantly increase the number of fibres released during a wash.

The problem has become so acute that the Women’s Institute in the UK has instigated a new campaign, Plastic Soup, aimed at stopping the plastic fibres released during laundering, from reaching the sea.

Tinkering at the edges of the problem?

When Patagonia first started selling fleeces made from recycled water bottles in 1993 everyone hailed it as genius – a way of showing that fashion can be socially and environmentally conscious.

Today many brands use recycled plastic, and several like G-Star now harvest ocean plastic to make clothes. These products save costs for the manufacturer at the production end and they have tremendous PR cache, but with washing they still end up shedding plastic back into the ocean – in a form that is harder to remove.

Patagonia tacitly acknowledges that its recycled plastic fleeces, which were intended to solve one pressing problem are breaking down into microplastic and therefore contributing to an entirely different environmental problem. It is to be congratulated for making the issue so visible on its website when other manufacturers don’t.

But there is no suggestion that it has any plans to stop selling these items. Indeed that production of polyester is outstripping that of cotton and wool, and it’s only expected to grow in the coming years as the fashion industry demands more of the stuff.

Is the focus on designing better – or different – plastic clothes really the answer or is it just the kind of feel good marketing solution we’ve seen so many times before?

Examples that spring to mind include safer substitutes for BPA which turned out to be not so safe, safer pesticides like glyphosate which turned out to cause cancer, safer ways of smoking like e-cigarettes, which still deliver significant amounts of toxic chemicals directly to your lungs.

The new world of biosynthetics – plastics made from food waste or crab shells, leather made from pineapples or mushrooms, or fibres like lyocell made from eucalyptus trees – may sound promising but there is almost no data to show what their true long-term environmental impact is.

For instance, how much more energy intensive they are to refine and produce? What impact will using food crops to produce clothes have on food prices?  Some food-based plastics, for instance those made from soya and maize, are made from genetically modified crops (and Brazil has recently approved the release of GM eucalyptus trees), potentially increasing the acreage devoted to these crops. They are sold as ‘safe’ because we don’t eat them but there is no proof that this is the case.

NGOs like Mermaids, based in the Netherlands, have also released some consumer-focused guidelines. These include avoiding the use of detergents with high pH, powder detergents, and the use of oxidising agents. It also suggests washing clothing in cold water and softening hard water.

A small German company has just developed developing a special mesh bag, the Guppy Friend, which traps microfibres in the wash (Patagonia provided some start-up money).

Advice on how to dispose of the trapped plastic particles that collect in the bag, however is a little vague. They don’t biodegrade and the idea that they, along with other rubbish, can be safely incinerated is misleading. In spite of the bright shiny PR that surrounds it, incineration is a polluting ‘solution’ that simply returns microparticles to the air instead of the sea (although eventually they find their way to the sea as well).

All companies selling synthetic clothes – whether they publicly acknowledge the problem or not – are in the same boat and their responses are basically the same and tailored towards customer reassurance and having the least possible impact sales.

These responses are typical of any large company faced with the idea that its products are damaging the environment and/or people’s health: shift the responsibility onto the consumer and call for more research before taking definitive action. Such delays – we’ve seen them on other big issues like smoking and climate change – can be costly.

The most basic question we all have to answer now is: how much of our future are we willing to gamble away for the sake of a t-shirt?

Polyester and acrylic clothing sheds hundreds of thousands of plastic fibres each time it is washed. {Photo: Bigstock]