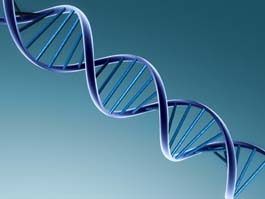 Why do we keep banging on about GM?

Some people might ask why this website, which is mostly concerned with natural health, has taken it upon itself to become more and more outspoken about genetically modified food.

Why not, instead, just post a lot of nice articles about how good organic is, rather than how bad GM is? What does GM have to do with health anyway?

This is why the recent UK commitment to growing more GMOs is abhorrent to us. Shame on our government for giving its backing to some of the boldest lies we’ve ever heard. Two days after environment secretary Owen Paterson made his speech, and not to anyone’s surprise, a national newspaper revealed the extent to which our government ministers and regulators have crawled into bed with the biotech lobby. Now, at least, we can fully understand their enthusiasm.

Genetically modified food is begin driven through not because we need it, not because our problems are caused by some terrible lack of GM food, but because people with their eyes on short-term financial gains see it as a potentially profitable niche market.

Haven’t we all had enough of that scenario – and the terrible damage that it does?

A threat to organic

We campaign against GM because once farmers begin the widespread planing of GM it directly threatens the organic supply chain on which we, as individuals who care about health, rely. Once GM crops are out in the open, they cross-breed with other plants.  There is no way to control this, no way to predict it and no way to stop  it.

You can’t tell a bee or a butterfly to avoid GM crops and only pollinate the organic ones. And GM  pollen and seeds don’t obey the legal boundaries between farms. They simply drift with the wind, like all seeds and pollens do.

The closest we’ve ever come to hearing the effect of widespread planting of GM described accurately is to compare it with the widespread release of  nuclear radiation. Once it’s in the environment it’s there for a very long time, if not forever, and you can’t take it back.

That fact alone should set alarm bells ringing and invoke the importance of the Precautionary Principle.

In the US however, they are throwing precaution to the wind – to the extent that the FDA has said it will allow biohackers using a Kickstarter funding programme, to send out packets of GM seeds containing synthetic, man-made DNA.

Synthetic DNA is DNA that does not exist anywhere in nature but which was written on a computer and ‘printed off’ on a ‘bioprinter’ before being inserted it into plant DNA. Potentially 400,000 packets of these seeds could be sent out and planted without any government oversight at all.

We applaud the efforts of the etc group for their clever Kickstopper programme which is trying to do the job the US government should be doing to stop this abomination.

We also campaign against GM because we absolutely do not accept the bland reassurances of regulators who say it’s perfectly safe.

Such assurances are based on nothing more than wishing it to be true. No proper human trials have ever been conducted on the safety of eating GM food. Such trials as have been conducted in animals have shown disturbing results including tumours, sterility, growth retardation, damage to internal internal organs such as the liver and kidneys, and early death.

Most recently scientists in Australia and New Zealand have shown that GM wheat may cause Glycogen Storage Disease IV, resulting in an enlarged liver, cirrhosis of the liver, and failure to thrive. Children born with this disease usually die at about the age of 5.

In the US which grows half the world’s GM  crops and where GM in in nearly every kind of food bar some fresh fruits and vegetables and some pulses, people are eating so much GM that it would be impossible now to conduct a proper trial. There would be no non-GMO control  group large enough to fully test the effects of eating GM.

That is just one more good reason to keep Europe GM free – to ensure there IS some kind of control group to help us understand the health impacts of this nearly two decade long uncontrolled experiment in human eating.

We also bang on about GM because we know that there are still people out there who have not engaged with this problem. Probably they think it is too technical or complicated for them and they shy away from it in case they look stupid by speaking out.

This is as much the fault of the pro-GM lobby – which has steadily directed the GM debate away from the public arena and into the muddy waters of modern  corporate-funded science – as it is activists who have allowed this drift to take place. It’s a drift as toxic as the drift of GM pollen and seeds from one field to another and it must be challenged.

Genetically modified food is everyone’s business. We bang on about it because it’s one of the most profound social issues of our time. It dictates the direction of travel for our farmers, our environment, our money, our government policies, our foreign aid, our media mindsets, our diet, our health and out future.

Like air pollution and nuclear radiation it can be hard to see the immediate effects of GM, but they exist and they will be difficult to remedy if we don’t put our feet down now. 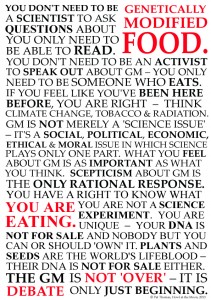 Our site contains a lot of well referenced material on GM. We regularly update this page which is a round-up of all our GM articles.

Our sister site Citizens Concerned About GM is a fantastic resource for those who want to delve even deeper.

Having the research on your side is important. But we should make no mistake that as citizens we also have – indeed have always had – a moral and ethical high ground when it comes to GM.  When you are finding the data just overwhelming remember that and do take to heart the words of this GM Manifesto (put together by our website editor, author and campaigner Pat Thomas) which empowers everyone to take a stand.

Together we can stop GM. So let’s get started.