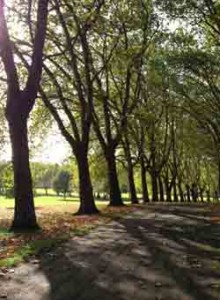 Natural Health News — A major new assessment in the US has shown that trees are saving lives and preventing acute respiratory symptoms – and therefore saving everyone money.

If you live in an urban area the benefits are greater.

Airborne pollutants are associated with a wide range of negative health impacts on the lungs, heart, circulatory and neurological systems.

Focussing on the respiratory effects, scientists working with the US Forest considered four pollutants for which the US EPA has established air quality standards: nitrogen dioxide (NO2), ozone (O3), sulphur dioxide, and particulate matter less than 2.5 microns (PM2.5) in diameter.

They then calculated that trees are saving more than 850 human lives a year and preventing 670,000 incidents of acute respiratory symptoms.

Writing in the journal Environmental Pollution the researchers says that while trees’ ability to remove pollution equated to an average air quality improvement of less than 1%, the impacts of that improvement are substantial, cutting healthcare and other costs by around $7 billion every year.

Putting a value on nature

The study is unique because while various studies have estimated pollution removal by trees most do not directly link the removal with improved human health effects nor do they put a monetary value on those benefits.

Tree cover was associated with a national reduction of more than 850 deaths. In the US there are around 130,000 PM2.5-related deaths and 4,700 ozone-related deaths each year. Although the life-saving effect of having trees in your area may seem small (approximately .6%) it amounts to a big saving in terms of healthcare and other costs.

The benefits of tree cover vary from area to area. Tree cover in the US is estimated at 34.2% of the land, but varies from 2.6% in North Dakota to 88.9% in New Hampshire. States with the greatest pollution removal rates were California, Texas and Georgia, while states which saw the greatest savings in healthcare and other costs were Florida, Pennsylvania and California.

For instance, because human populations are more concentrated in urban areas, the health effects of trees, and their value in terms of preventing disease in urban areas accounts for around 68% of the $7 billion savings.

Airborne pollutants are associated with a wide range of negative health impacts on the lungs, heart, circulatory and neurological systems.

With more than 80% of Americans living in urban area, this research underscores how essential urban forests are for human wellbeing.