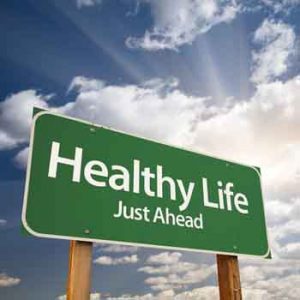 There's more to being 'healthy' than just an absence of symptoms. [Image: Bigstock]

How to be healthy

Achieving ‘good health’ is now one of the single biggest preoccupations in modern society. But if pressed most of us would struggle to define exactly what ‘good health’ is.

At a pinch most of us would define it by the absence or presence of minor or irritating symptoms  Yet clearly good health is more than this; for if it was simply a matter of a well-behaved body how is it that some individuals, for instance those dying of cancer, often report feeling a profound sense of well-being?

Nevertheless it is troublesome symptoms – headaches, insomnia, digestive problems, respiratory and skin troubles and being susceptible to every ‘bug’ that is going around – are that most of us fight off in a bid to stay healthy. Complaints like this are becoming increasingly common, many of us now consider them part of the ‘normal’ human condition. Indeed it is clear that in spite of our increased longevity, a growing number of people in their prime report a lack of vitality and a variety of uncomfortable symptoms that they cannot pin down.

According to US health expert Jeffrey Bland PhD such people are suffering from “vertical ill health”; not sick enough to take to their beds (and become horizontally ill) but lacking essential vitality and a sense of wellbeing.

» Modern healthcare is still overly focused on suppressing symptoms rather than helping us get well.

» This has spawned a multi billion dollar industry in pharmaceuticals – and especially over the counter drugs – that give us the illusion of control over our health, but which can actually make us sicker.

» The alternative approach to health looks for root cases of illness, acknowledges that health is a process and that there’s more to being ‘healthy’ than just an absence of symptoms.

While no one can expect to be symptom-free 100% of the time, banishing these health niggles has become the mainstay of the over the counter drugs industry – a market currently worth £2.5 billion a year in the UK alone and more than £97 billion ($120 billion) globally.

In the past decade more and more drugs have come off the prescription list and become available off the shelf to provide quick relief. The government’s enthusiasm with self-medication, has a single purpose: to relieve the pressure on overworked physicians who have little time for consultations and little to offer those suffering from chronic sub-clinical health complaints.

The trend for self-medication is actively sold to the public as a way of being in control of their own health, yet most people who self-medicate are just an extension of the GP or the pharmacist, practising the same magic bullet paradigm that causes ongoing health problems in the first place. Worse, it can so easily spiral out of control.

Drugs changing who we are

Not long ago a report came out which identified 5 key OTC pharmaceuticals that our society is effectively addicted to: codeine-based (especially compound analgesic) medicines, cough products (particularly dextromethorphan), sedative antihistamines, decongestants and laxatives. Because they are sold over the counter they are poorly monitored and the scale of the problem is still largely unknown.

We recently reported on the many risks of paracetamol – a drug many people gulp like candy. These risks include increased rates of death, heart attack, stomach bleeding and kidney failure. It’s not just the mind that is affected. Earlier this year a study found that paracetamol can impede our ability to process what’s going on around us and adapt our behaviour accordingly. Drugs like this are literally changing who we are and how we see the world.

At least 95% of illnesses are self-limiting. In other words they will heal by themselves and do not require any intervention. In many cases suppressing symptoms by taking an over the counter medication can actually make things worse because it never really tackles the cause of the problem.

A more holistic approach recognises that many of the symptoms that we associate with illness are really the body’s attempts to get well and to regain a state of homeostasis, or balance.

Unfortunately in this country most people get their information about their bodies and about health matters via the media, and the media has a lot to answer for in terms of the way we define wellness.

First of all, our media suffers from an almost incurable disease itself – expert-itis. Whether writing about conventional medicine or alternatives the media tendency is to ignore context and uncritically reproduce everything that any so-called health expert has to say. This can often led to the passing on of incomplete, contradictory or simply wrong information. It can also reinforce the idea that others know more about your health than you do and that your body is somehow ‘wrong’.

Few people are aware of the hidden agenda in most health reporting, of the multimillion pound PR machinery that drip feeds the media with self-serving information on the importance of drugs to relive symptoms. But consider that the pharmaceutical industry  spends more money marketing drugs than it does developing them and you will get the picture.

In this way we are educated about health and have learned that we must free ourselves from our troublesome bodies. So we wage war, buying more and more stuff to try and quiet the body and make it behave, make it run full tilt 24/7 and forgetting that prevention is perhaps the most important part of any cure.

Indeed, studies suggest that healthy people consistently behave in ways that are conducive to good health. This includes aiming for balanced nutrition, taking regular exercise, knowing when to take a break, not voluntarily poisoning the body with chemical toxins, pursuing spirituality, paying attention to and taking responsibility for their feelings and actions and by building and maintaining strong social support.

The conventional approach to healing also encourages the ‘patient’ to switch off and leave everything to the experts. Unfortunately it is very difficult to make sensible choices about healthcare when you are ‘switched off’.

Nobody feels whole and content every part of every day.  Indeed, some would go so far as to say that without illness, and the impact that it can have on our lives, good health has no meaning at all. On this site we believe that most of those health niggles we experience can be managed holistically and consciously and in more natural ways. Our aim is to provide good information to show that such methods can work and to help our visitors understand more about natural health and wellbeing.

If you want to be healthy there are several things you should bear in mind (and these points apply equally to conventional and alternative approaches to health):

Be informed. Getting independent information on your condition and your choices for healing is vital. Where possible always get more than one opinion.

Consider more than one approach. A combination of more natural approaches rather than a combination of drugs may be effective. For instance massage therapy such as Shiatsu can greatly enhance the balancing effects of nutritional or other biochemical therapies.

Give it time. Conventional medicine works, in the main, by suppressing symptoms. You may feel better, but you might not actually BE better. Alternative therapies work by addressing the cause and healing the whole body. This holistic process can take time and patience

Less is more. The aim of any medicine should be to support the body’s own ability to heal and change, not to undermine it or do all the work for it.  Studies into some herbs, for instance, have shown that taking larger amounts does not always produce better or faster results than taking small regular doses.

Work with your body. Have some faith that your body can do what it is supposed to.  It can tell you what is wrong both physically and emotionally if you are able to listen to it.  Before you go running to any practitioner, conventional or alternative, spend a few days trying to “tune in” to your real needs.

There's more to being 'healthy' than just an absence of symptoms. [Image: Bigstock]