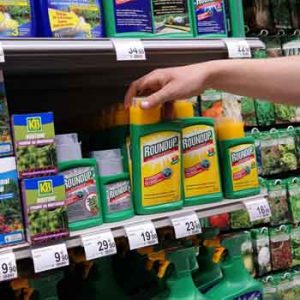 Roundup, and its active ingredient glyphosate are linked to a number of adverse health conditions. [Photo: Bigstock]

Natural Health News — A newly published study shows that low levels of exposure to the weed killer Roundup over a long period of time can cause liver disease.

The findings are likely to bring further public attention to the Roundup’s controversial active ingredient, glyphosate.

The peer-reviewed paper published in Scientific Reports used cutting edge molecular profiling to explore the effects of Roundup and is unique in that it is the first to show a causative link between consumption of Roundup at a “real world” environmental dose and a serious disease condition.

Female rats were fed with an extremely low dose of Roundup weed killer in their drinking water over a two-year period and found to suffer from non-alcoholic fatty liver disease (NAFLD). The dose selected by the researchers at King’s College in the UK was below what people are commonly exposed to in the everyday environment and thousands of times below what is permitted by regulators.

» Glyphosate is the active ingredient in the world’s most widely used herbicide, Roundup.

» Using cutting edge diagnostic technology scientists in the UK have found that long-term exposure to glyphosate through the diet – at levels many thousands of time lower than are currently considered ‘safe’ – can trigger non-alcoholic fatty liver disease (NAFLD).

» NAFLD affects around 1 in 3 of us and is a growing health problem in the developed world; if left unchecked can cause irreversible liver damage.

Non-alcoholic fatty liver disease (NAFLD) is an increasingly common condition that occurs in around one in three of the general population, and in the vast majority of people with type-2 diabetes. As its name suggests it is caused by a build-up of fat in the liver. Warning signs include fatigue and pain in the upper right abdomen as well as yellowing of the skin and eyes (jaundice), red palms and in men enlarged breasts.

A healthy liver should contain little or no fat and this build-up if left unchecked can lead to serious and irreversible liver damage, including cirrhosis. Having high levels of fat in your liver is also associated with an increased risk of problems such as diabetes, heart attack and stroke.

Glyphosate, the ‘active ingredient’ in Roundup was recently classified as a probable human carcinogen by the International Agency for Research on Cancer (IARC) of the World Health Organization. It has also been found to be an endocrine disrupter and to make some bacteria more resistant to antibiotics.

Most people are exposed to glyphosate through water and through residues in foods, in particular cereals and pulses. Its use on farms has increased exponentially in the last 20 years since the introduction of genetically modified crops, which are engineered to withstand repeated sprayings with Roundup and not die.

Testing in the US at the end of 2016 revealed just how ubiquitous glyphosate is in foods. Campaigning groups Food Democracy Now and the Detox Project tested 29 common processed foods. Results showed glyphosate residues in General Mills’ Cheerios at 1,125.3 parts per billion (ppb), in Kashi soft-baked oatmeal dark chocolate cookies at 275.57 ppb, and in Ritz Crackers at 270.24 ppb, according to the report. Varying levels were found in other products such as Kellogg’s Special K cereal, Triscuit Crackers and several other products.

Although one of the most in depth, the new study is not the first to show that glyphosate causes liver damage. In 2015 a study, also from King’s College, found that Roundup can cause liver and kidney damage in rats at only 0.05 ppb. Another UK study found that levels as low as 10 ppb can have toxic effects on the livers of fish.

Dr Michael Antoniou, who is a member of the Gene Expression and Therapy Group at King’s College London and one of the authors of the paper, says: “The findings of our study are very worrying as they demonstrate for the first time a causative link between an environmentally relevant level of Roundup consumption over the long-term and a serious disease – namely non-alcoholic fatty liver disease. Our results also suggest that regulators should reconsider the safety evaluation of glyphosate-based herbicides.”

Roundup, and its active ingredient glyphosate are linked to a number of adverse health conditions. [Photo: Bigstock]