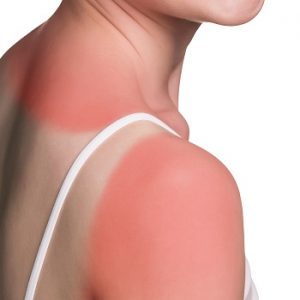 Sunburn is no joke. It's a sign of severe damage to your skin and in the long term can raise your risk of skin cancer. [Photo: Bigstock]

Quick relief for sunburn and sunstroke

In the summer – as in every season – every skin is different.

What can produce a tan in one person will produce a stinging sunburn in another. The only safe advice is to learn your skin’s limits and stick to them – as well as using a variety of methods to protect your skin from the most intense rays of the sun.

Most of us know that to prevent painful burning and blistering, we need to keep the skin protected with sunscreening lotions and only expose ourselves to the sun for short periods of time until accustomed to it. But even the most careful individuals do occasionally get burned – or overcome by the summer heat.

If a person becomes severely overheated, the cooling mechanism of the skin fails and it becomes hot and dry losing its ability to combat the sun’s rays. Body temperature can rise dangerously and the person may feel dizzy, nauseated, weak, and feverish and have a severe headache. These are signs of sunstroke and you should seek emergency treatment.

Self-help methods include cooling the person off as quickly as possible with cool water until temperature begins to drop. Avoid over-chilling and give a glass of tepid to cool water with half a teaspoon of salt to encourage perspiration and equalise balance of body fluids.

Alternative medicine offers a variety of well-tried and effective skin treatments for sunburn including bathing in cool chamomile infusion and applying soothing calendula. Ointments containing essential oils such as lavender, chamomile or aloe vera are all useful for sunburnt skin – and, in addition, some remedies like lavender essential oil and aloe vera can be applied neat to the skin to promote healing.

Check out our suggestions below and stay safe and happy in the sun.

Choose the remedy that best matches the symptoms:

For an all over burn soak in a cool (not cold) to tepid bath into which you have added either of the following:

Sunburn is no joke. It's a sign of severe damage to your skin and in the long term can raise your risk of skin cancer. [Photo: Bigstock]