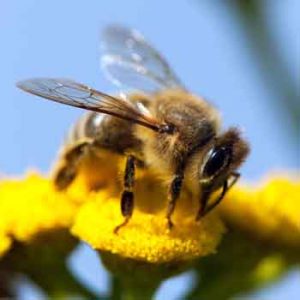 New evidence suggests that glyphosate is potentially neurotoxic to honeybees and may contribute to widespread bee deaths. {Photo: Bigstock]

Is Roundup killing our honeybees?

A recent study has uncovered a link between the world’s most widely used herbicide – Roundup – and the dramatic decline in honeybee populations in North American and Europe.

The authors of the new study published in the Journal of Experimental Biology  were investigating whether exposure to glyphosate (the active ingredient of Roundup) at levels that bees could realistically be expected to encounter in the field could affect their feeding behaviour.

What they observed was that concentrations of glyphosate (GLY) produced “a reduced sensitivity to sucrose and learning performance for the groups chronically exposed to GLY concentrations within the range of recommended dose”, negatively impacting the honeybee’s sensitivity to nectar reward and impaired their learning abilities – are two behavioural consequences likely to adversely affect their survival abilities.

In addition they noted a significant decrease in elemental learning, non-elemental associative learning, and short-term memory retention, when exposed to higher doses of glyphosate.

Previous tests on bees have only looked for signs of acute toxicity (this is also a problem with many human toxicological tests); sub-lethal or prolonged exposure effects are not generally studied.

While sub-lethal doses were not found to overtly affect their foraging behaviour, the researcher suggest that because of their resilience, “…forager bees could become a source of constant inflow of nectar with GLY traces that could then be distributed among nest mates, stored in the hive and have long-term negative consequences on colony performance.”

A new poison for our bees

Most discussions about colony collapse disorder (CCD) have focused on poor nutrition, Nosema, and mysterious viruses and of course neonicotinoid insecticides. The potential for glyphosate to harm bees is new, but this is not the first time it has been implicated in bee deaths.

Last year, plant pathologist Dr. Don Huber submitted a paper to the Center for Honeybee Research highlighting glyphosate as a possible cause of CCD.

One of the reasons for the widespread use of Roundup is the planting of Roundup Ready GM plants – which have been genetically engineered to withstand repeated sprayings of this herbicide. As weeds become resistant to Roundup, farmers find they spray more and more on their crops.

Most recently beekeepers in Mexico have won a court judgement which could help save their bees from exposure to glyphosate and halt the widespread planting of GMO soya crops there.

But earlier this year a district judge in the state of Yucatán overturned this permit. The judge said he was convinced by the scientific evidence presented about the threats posed by GM soya crops to honey production in the Yucatán peninsula, which includes Campeche, Quintana Roo and Yucatán states.

Mexico is one of the world’s largest producers of honey, and the EU is a big market for hone. However GM containing honey is not allowed for human consumption in the EU (however this ruling is being challenged).

Biotech companies argue that glyphosate is not toxic and further that it poses no threat to neighbouring non-GMO fields, however, the judge further ruled that co-existence between honey production and GM soybeans is not possible.

For us humans, the big question is not just whether we can protect our bees, but also whether pesticides like glyphosate are also harming our health in the same way and if so whether, and when we will take steps to protect ourselves.

New evidence suggests that glyphosate is potentially neurotoxic to honeybees and may contribute to widespread bee deaths. {Photo: Bigstock]