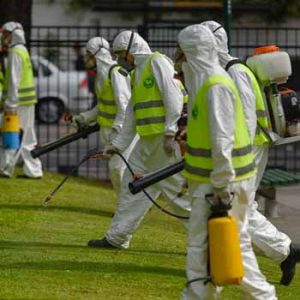 Entire communities are being engulfed in insecticides aimed at killing mosquitoes. [Photo: Bigstock]

When the words ‘global public health emergency’ pop up on the TV screen or in the headlines of a newspaper, it’s reasonable to hope that there is good information out there to reassure you – or at least inform you.

Not so with the zika virus. The whirlwind of hype and hysteria, half-baked theories and speculation has been both unhelpful and unnerving. For weeks now ‘news’ stories about zika have been anything but.

The story is certainly moving fast, but let’s try to sort out what we know from what we don’t.

Things we do know

Zika was first discovered in humans in the 1950s. It belongs to a family of viruses that include dengue, yellow fever, Japanese encephalitis and West Nile virus. It is carried by daytime active mosquitoes Aedes mosquitoes, particularly A. aegypti.

» New evidence suggests the media and health authorities have been too quick to attribute an increase in microcephaly in Brazil to the zika virus. In other parts of the world where the zika virus is found there is no link with brain damage in babies.

» In order to control mosquito populations, Brazilian authorities have been adding a toxic pesticide, pyriproxyfen, to public water supplies since 2014.

» The insecticide kills and disables mosquitoes by causing the same kind of malformations currently seen in babies in Brazil.

» Physicians in Brazil and Argentina are calling on the government to make the link between corporate politics,  the high use of insecticides and the current health emergency in Brazil.

Signs of infection, if they appear at all, include fever, rash, joint pain and conjunctivitis, and tend to go away on their own in under a week. But for the majority of adults, zika produces the sort of mild symptoms that could be caused by anything.

Many don’t even know they are infected and only a blood test can confirm this. Except that the test for zika is nearly useless because it generates high levels of false negatives (giving the all clear when you are infected) and false positive results (saying you are infected when you are not) – particularly in areas where there is Dengue fever as well.

Although zika has been linked to an abnormality called microcephaly, where babies are born with very small or malformed heads or with damaged brains, this condition can also be caused by lots of other things, both known and unknown.

The WHO statement declaring zika a ‘public health emergency of international concern’ was full of qualifications and stressed that there was no proven link between zika and microcephaly. The real emergency, it seems, was the need to find out more.

Very quickly rumours arose linking the outbreak in Brazil with genetically modified mosquitoes released there in 2012.  Experience suggests it’s likely that there will eventually be unhappy consequences from the GM mosquito trials, but there is as yet no proof that the GM mosquitoes and zika are linked.

In the meantime biotechnology companies are using the emergency to hawk their wares, insisting that that the outbreak could actually be solved, and babies saved, by releasing more GM mosquitoes. There’s no proof for this either.

My money has been on a chemical cause for the increased rates of microcephaly which just happened to coincide with an outbreak of zika. This isn’t the ‘sexy’ answer. Newspaper and TV programmes don’t like it because it requires us to think rather than react and, of course, forces us to acknowledge consequences and complexity.

But new information this week suggests that the chemical cause is now the most likely.

A report from Physicians in the Crop-Sprayed Towns, an Argentine doctors’ organisation, suggests that widespread State-mandated use of the insecticide pyriproxyfen, to control mosquitoes, is the most likely cause.

Pyriproxyfen is a growth inhibitor of mosquito larvae. It alters the development process from larva to pupa to adult, generating malformations in developing mosquitoes and killing or disabling them.

It is an endocrine disruptor and is teratogenic (causes birth defects).

According to report, the Brazilian Ministry of Health’s insistence that zika is the cause of microcephaly fails to acknowledge that in the area where most sick people live, pyriproxyfen was introduced into the drinking water supply in 2014.

It also notes that zika has never before been associated with birth defects, even in areas where it infects 75% of the population.

Indeed, there are no cases of microcephaly among the 3,200 pregnant women infected with Zika in Colombia.

A separate report by ABRASCO, a Brazilian doctors’ and public health researchers’ organisation, also names pyriproxyfen as a likely cause of the microcephaly.

It condemns the strategy of chemical control of zika-carrying mosquitoes, which it says is contaminating the environment as well as people and is not decreasing the numbers of mosquitoes.

ABRASCO suggests that this strategy is in fact driven by the commercial interests of the chemical industry, which it says is deeply integrated into the Latin American ministries of health, as well as the World Health Organization and the Pan American Health Organization.

Look at the big picture

The report also names the British GM insect company Oxitec as part of the corporate lobby that is distorting the facts about zika to suit its own profit-making agenda. The Argentinian physicians agree noting the GM mosquito experiment has been “a total failure, except for the company supplying mosquitoes”.

In the meantime yet another report, in which the scientists actually took the time to look through hospital records, suggest that large numbers of babies with borderline small head sizes were being born in Brazil as far back as 2012, two years before the zika virus is thought to have entered the country.

They suggest we must start looking beyond zika for answers. Effects from other infections, exposure to teratogens or agents that cause birth defects, such as drugs, and malnutrition, can all have “an intensifying effect.”

Many pesticides can also cause birth defects and Brazil, the world’s largest consumer of pesticides, was awash in these even before the authorities started putting pyriproxyfen in drinking water.

Bear in mind, also, that man-made climate change is expanding the area in which the Aedes mosquitoes and other disease carrying insects can thrive.

Adding to the toxic soup

If there is a link between zika and microcephaly it is highly likely to be the measures we take to fight disease bearing insects.

While the world holds its breath to watch how the real story develops, authorities in Brazil are fumigating neighbourhoods with more insecticides in order to kill more mosquitoes. Pictures of half-dressed residents and their children standing by while being engulfed in a toxic cloud are beyond ironic. It is not clear what substance they are using, though there have been talks of more widespread use of DDT.

At the same time, if you are flying back home from a zika area your plane will be fumigated with insecticides  – and you’ll likely be reassured that this is totally safe.

Zika and microcephaly are part of a toxic soup that corporate interests and politics in the name of profit have created in Brazil, as well as other developing nations. We have a duty to understand that and not simply fall into the easy ‘out’ of ‘germ phobia’ that so often distorts our picture of health and disease.

Entire communities are being engulfed in insecticides aimed at killing mosquitoes. [Photo: Bigstock]